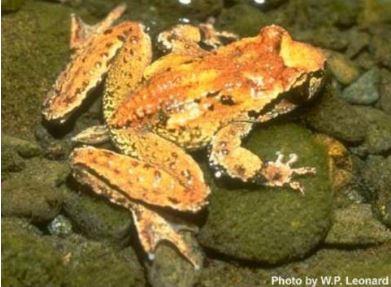 Male coastal tailed frogs have a 'tail-like' organ for breeding  (W.P. Leonard, Copyright)
Category: Amphibians
Family: Ascaphidae
Ecosystems: Riparian areas
If you see this species, please share your observation using the WDFW wildlife reporting form. Providing detailed information such as a photo and exact coordinates will improve the confidence and value of this observation to WDFW species conservation and management.

While this frog is still relatively common and widespread, efforts have been devoted toward understanding and avoiding excessive stream temperature alterations and siltation caused by forestry practices.

According to NatureServe, the state conservation status of the coastal tailed frog population is considered “apparently secure” in Washington.

This is a moderately small (1.5 to 2 inches snout to vent length), slender-bodied frog with rough skin. The head is relatively large, flattened and slightly broader than long. The snout tapers anterior to the eyes and is relatively short, and a pale triangle often exists between the eyes and the snout. The pupil is vertical. An eye-stripe extends from the snout to the shoulder. The toes are slightly webbed and the outer two hind toes are flattened. The typically dark ground color is usually similar to the substrate of the habitat occupied. The males have a tail-like copulatory organ, tubercles on the palm and forearm and, during the breeding season, small dark pads on the sides of the abdomen.

The tail appendage of the male coastal tailed frog is unique among anurans. Tailed frogs look similar to Pacific treefrogs, but treefrogs have horizontal pupils, circular discs (“toe-pads”) at the tips of their fingers and toes, rounded (rather than flattened) 4th and 5th toes on their hind feet, and typically lighter, bright ground coloration (often with greens or beiges).

Great Basin spadefoots have vertical pupils (the only other Washington anuran that does) but they are typically found only in arid habitats and have black spades on the underside of their rear feet.

The tadpole has a somewhat flattened body with dorsal eyes, a ventral suctorial oral disc (mouth) and a low fin that originates at the dorsal tail-body junction. The oral disc covers about 1/3 to 1/2 of the lower body surface. Tailed frogs have the only tadpole in Washington able to adhere to rocks in fast-flowing streams with this large sucker-like mouth. The tip of the tail is broadly rounded and typically has a white spot bordered by black. The spiracle is located on the mid-belly (mid-ventral) and the nostrils are located closer to the eyes than the snout.

The eggs are unpigmented, deposited in strings of 40 to 80 and attached to the undersides of rocks in cool flowing steams.

No vocalizations have been documented. Moreover, coastal tailed frogs lack some of the structures used to make sounds (tongue and vocal sacs) found in other frogs.

Coastal tailed frogs are primarily found in or associated with relatively cold, clear, rocky steams in mature forests. All life stages are adapted for life in fast flowing streams.

Present year-round in and near streams. Primarily night active, but tadpoles and frogs can also be observed during the day. Frogs are most active from April to October, but this varies by site and conditions.

Mating takes place in the fall. The male’s “tail” is used for internal fertilization to prevent sperm from being washed away. Females are thought to store sperm until eggs are deposited in the summer. Eggs are attached to the undersides of rocks to keep them in place. Eggs hatch in approximately six weeks. The tadpoles have a large ventral suctorial mouth that allows them to feed and move in high-energy streams without losing contact and unintentionally drifting. In Washington, the larval phase lasts two to five years depending on location and elevation. Metamorphosis usually takes place in late summer.

In Washington, this species occurs in the Willapa Hills, the Black Hills, and the Cascade and Olympic Mountains. Elevations range from near sea level to 6804 feet. Populations in the Blue Mountains were split into a new species – Rocky Mountain tailed frog (Ascaphus montanus).

This map from the Washington Herp Atlas illustrates the distribution of coastal tailed frog in Washington based on records in the WDFW database as of 2016. If you see this species in areas that are not indicated on the map or have more recent observations (less than 10 years), please share your observation using the WDFW wildlife reporting form.

The state conservation status of the coastal tailed frog is “apparently secure” based on the assumption that it is common according to the most current records.

This species is vulnerable to management practices that alter the riparian or aquatic zones of streams, especially those that change the moisture regime, increase stream temperature, increase sediment load, reduce woody debris input and change stream bank integrity. Protection of the upper reaches of streams is particularly important for this species.

More research is needed on forestry practices and the best approaches to minimizing harm to tailed frogs and their habitat.