Hagfish are a primitive jawless fish belonging to the Myxinidae family. They inhabit muddy seafloors in temperate water throughout the world's oceans at depths ranging from 30 to 16,000 feet. Worldwide, there are over 60 known species; however, just two, the Pacific (Eptatretus stoutii) and black hagfish (E. deani) are commonly found in Washington's coastal waters. Hagfish have an eel-like form and they are notorious for secreting copious amounts of slime when threatened or agitated. They are commonly referred to as "slime eels."

In Washington, hagfish are harvested both live and frozen, and essentially all catch is shipped to South Korea, where hagfish are considered a delicacy. In the early 1990s, experimental gear permits were issued to several participants to harvest hagfish for the "eel-skin" leather market in South Korea. Interest in the fishery faded due to difficulties with on-board handling. Captured hagfish often attacked and wounded each other in the vessel's hold and the subsequent damage to the skin rendered them unmarketable. That fishery ended in 1992.

The hagfish fishery on the outer coast of Washington opened as a "trial fishery" under the Emerging Commercial Fishery Act (ECFA) in 2005, prompted by industry request. The purpose of the ECFA is to allow the development and evaluation of new fishery opportunities. The trial designation under the ECFA allows for participation by anyone holding a valid emerging commercial fishery license (i.e., open access) and a hagfish trial fishery permit. The permit is non-transferable and has no market value. A person may hold only one permit at a time.

The fishery is open year-round in only Pacific Ocean waters greater than 50 fathoms in depth and landings are not capped. WDFW closely monitors fishing activity by requiring vessel captains to provide notification in advance of returning to port. This facilitates dockside collection of catch and biological data. Monitoring is also accomplished through a mandatory logbook program.

The commercial hagfish fleet harvest hagfish with baited traps that are placed on a common ground line, which is equipped with an attached marker buoy and pole. The traps are placed on the sea-floor and held there with weighted or anchored chain. The fishery fleet in Washington mostly use traps built from olive or pickle barrels. Traps are equipped with one-way entrance funnels that can vary in number and placement. Traps also have numerous dewatering holes. Commonly used baits include squid, sardine, herring, and various scrap pieces from rockfish.

Notices and letters to industry 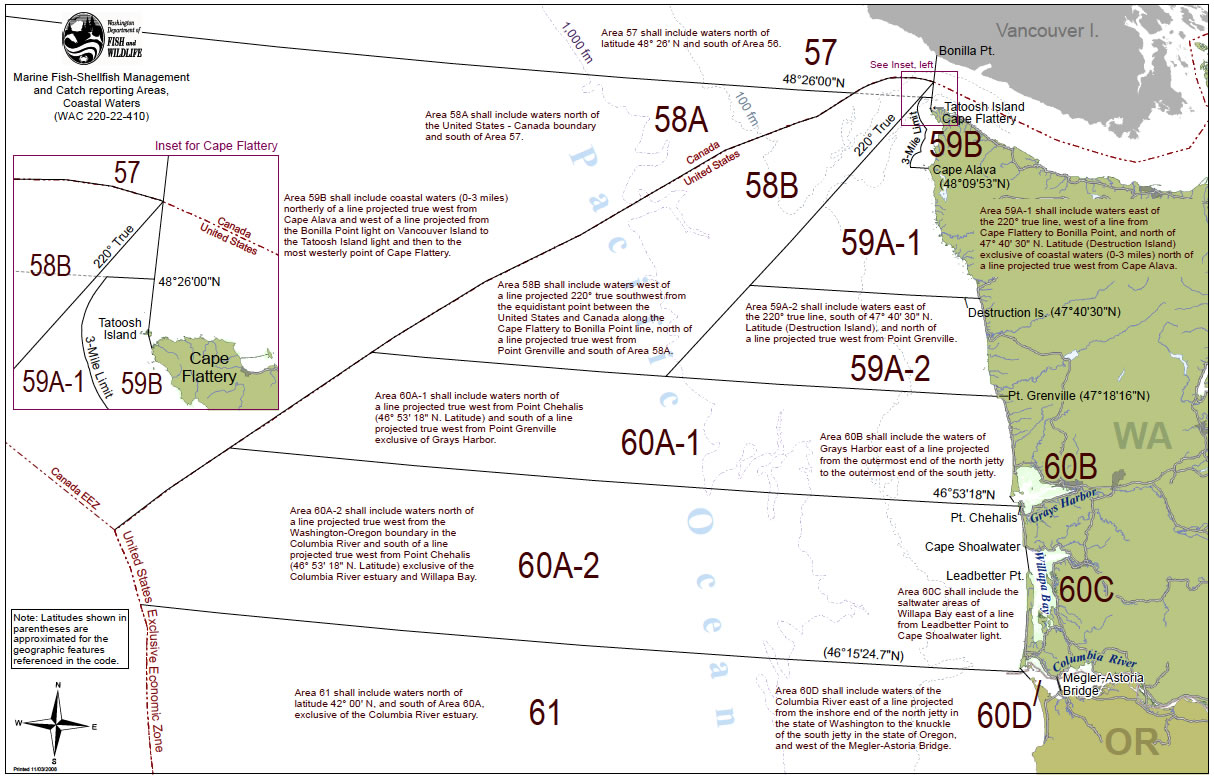 It is important to understand fisheries operating under the Emerging Commercial Fishery Act (ECFA) are not permanent and can be closed if deemed necessary to protect and preserve the resource, in particular, or more broadly marine ecosystem habitat or health. It is essential that fishers support the efforts to collect the catch and biological data necessary to evaluate the sustainability of the hagfish fishery.

A commercial fisher is required to possess two documents: an Emerging Commercial Fishery License and a Hagfish Trial Pot Fishery Permit to fish for or deliver hagfish (220-360 WAC).

The 2022 permit requirements are:

Do not combine multiple trips on a single logbook page. Use as many logbook pages as needed for a single trip.

Fill out the "Header" top section of each page completely.

Buyer: Name of the fish dealer that purchased your fish

Crew size: Number of crew onboard during the trip (include captain)

Complete each line of the catch section, even if there was no catch.

Date Set: Date set for each string (month and day)

Date Pulled: Date pulled for each string (month and day)

Number of Pots: Number of pots on each string

Latitude Start: Record the latitude (in left row) and longitude (in right row) for the beginning point of each string in degrees and decimal minutes

Latitude End: Record the latitude (in left row) and longitude (in right row) for the ending point of each string in degrees and decimal minutes

Retained Hagfish: Pounds of hagfish retained for that string

Returned Hagfish: Pounds of hagfish returned to the ocean for that string

Other Species: Species of fish returned to the ocean for that string