Despite being listed under the Endangered Species Act (ESA) in 1999, wild Puget Sound Chinook stocks have continued to fall in the past two decades. This continued decline has become even more pronounced in recent years, affecting the entire Puget Sound ecosystem, as well as local economies and fishing opportunities. The 2019 State of the Sound report noted that Puget Sound is in “grave trouble.”

As part of a comprehensive effort to address this decline, the Washington Department of Fish and Wildlife (WDFW) and tribal co-managers are working to secure long-term certainty and ESA coverage for Puget Sound salmon fisheries. This is a complex process that must comply with federal laws and federal court decisions regarding the rights guaranteed through treaties between the United States and the treaty tribes.

In spring 2021, litigation alleged that WDFW did not comply with federal laws and violated the ESA. WDFW did not share that perspective and filed a motion to dismiss the Department as a defendant.

In that motion, it was noted that the National Marine Fisheries Service (NMFS) had provided ESA coverage and that WDFW has managed Puget Sound fisheries consistent with the requirements of that coverage. In short, WDFW-managed fisheries have not engaged in the unlawful “take” of Puget Sound Chinook salmon.

On June 21, 2021, Fish Northwest voluntarily dropped their claims against the state (and Director Kelly Susewind). The Fish Northwest brief states, “Plaintiff Fish Northwest, pursuant to Rule 41(a)(1)(A)(i) of the Federal Rules of Civil Procedure, hereby voluntarily dismisses all causes of action herein against defendants Washington Department of Fish and Wildlife (“WDFW”) and Kelly Susewind (“Susewind”) without prejudice that are set forth in its above-captioned case.”

The litigation has had no bearing on WDFW’s commitment to work with tribal co-managers to secure long-term ESA coverage for Puget Sound fisheries. These joint plans allow NMFS to holistically consider the effects of both state and tribal fishing. This approach is also consistent with the court-ordered 1985 Puget Sound Salmon Management Plan requiring joint management and agreement on conservation objectives.

WDFW and the co-manager tribes are now working on an update to the long-term fishery management plan that will provide certainty on management objectives, continue to ensure that fisheries do not impede the conservation and recovery of Puget Chinook salmon, and result in long-term ESA coverage.

To accomplish that task, WDFW and the tribes have engaged the assistance of the Federal Mediation and Conciliation Service with the goal of finalizing discussions and submitting a Puget Sound Chinook Resource Management Plan by the end of 2021. The team of four federal mediators has initiated the process with meetings that include all parties occurring at least twice monthly, and contacts with individual parties occurring daily.

Until a long-term management plan is approved by NMFS, the Department will continue to work with co-manager tribes to secure annual ESA coverage for state and tribal fisheries.

What is the status of Puget Sound Chinook? 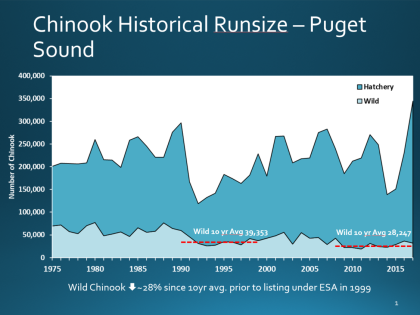 Puget Sound Chinook salmon were listed as threatened under the ESA in 1999.  A threatened species is one that is “likely to become an endangered species within the foreseeable future throughout all or a significant portion of its range.”

The recent State of Salmon in Watersheds report released by Gov. Jay Inslee’s Salmon Recovery Office shows that for key stocks in need of recovery, at best we are treading water. While harvest restrictions will continue when necessary to meet conservation objectives, these alone can’t recover salmon. Only by tribal, state, and local communities working together can these salmon runs be rebuilt to provide more fishing opportunities and maintain the outdoor-oriented, northwest lifestyle many of us enjoy.

How is ESA coverage secured for Puget Sound fisheries?

A fishery that results in the catch or catch-and-release of an ESA-listed species is in violation of the ESA unless that fishery has ESA coverage provided by NMFS.

In the past, ESA coverage has been secured through two approaches:

How long does it take to get fisheries approved for ESA coverage?

While the Section 7 consultation process was completed within two months of submission of the 2021-22 fishing plan, approval of a long-term, multi-year plan under Section 4(d) takes much longer. The extended time frame is necessary to complete the more complex analyses associated with a long-term plan and to complete the associated process for the National Environmental Protection Act (NEPA). Experience suggests that 15-18 months will be necessary to complete the ESA and NEPA processes for a joint tribal-state resource management.

Could WDFW get its own ESA “permit” for Puget Sound salmon fisheries?

WDFW has previously secured its own ESA coverage for some fisheries, typically when the state is the only entity managing the fishery. Where there is overlap between state and tribal fishing and management, we have relied on joint resource management plans. These joint plans are the best path forward because they allow NMFS to holistically consider the effects of both state and tribal fishing.