Treaty history with the Northwest Tribes 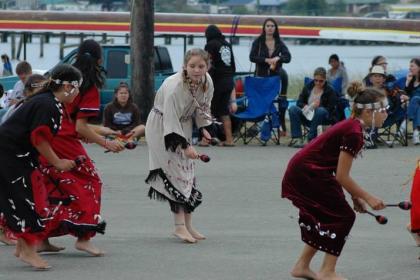 Stevens ultimately negotiated eight treaties with tribes in what would become Washington. The treaties established or promised reservations for the exclusive use of the tribes. In addition, the tribal nations reserved their right to continue traditional activities on lands beyond these reserved areas. The Stevens Treaties all contain substantially similar language reserving the right to hunt, fish, and conduct other traditional activities on lands off of the reservations:

"The right of taking fish, at all usual and accustomed grounds and stations, is further secured to said Indians in common with the citizens of the territory…together with the privilege of hunting, gathering roots and berries, and pasturing their horses on open and unclaimed lands."

There are additional tribes recognized by the federal government that do not have off-reservation tribal hunting rights; members of those tribes are subject to state hunting regulations.

Treaties between the U.S. and the Northwest Indian Tribes

Treaties are formal contracts between sovereign nations and in the United States are sources of federal law. As federal law, treaties preempt inconsistent state law under the Supremacy Clause of the Federal Constitution. The courts have ruled that state regulation of tribal exercise of off-reservation hunting rights on open and unclaimed land is preempted by the Stevens Treaties, except where state regulation is necessary for conservation purposes.

The courts apply specific rules when interpreting Indian treaties. These rules apply where treaty language is ambiguous, and are based on an understanding that the tribes were at a disadvantage in terms of English language skills and understanding of white legal concepts at the time of the treaty negotiations.

The Stevens Treaties say that the tribes have a “right” to fish and a “privilege” to hunt. While distinctions have often been made between rights and privileges in other legal contexts, both state and federal courts have determined that the two terms should be construed as equivalent in the context of Indian treaties. The Washington Supreme Court directly addressed this issue in State v. Miller in 1984, when the court held that there cannot be a distinction between the words “right” and “privilege” when interpreting treaties between Indians and the federal government.

Treaty rights are not rights granted to tribal nations by the United States, rather they are the inherent sovereign rights reserved by the tribes themselves. By signing the treaties, tribal nations retained those rights that they have possessed since time immemorial. Treaty rights belong to tribes and are not the property of any individual tribal member. Only tribal members may exercise treaty hunting rights. Members of one tribe cannot exercise the treaty rights of another tribe. Also, treaty rights must be exercised in accordance with tribal regulations.

The courts have created a narrow exception to the general rule that state regulation of tribal treaty hunters is preempted by the treaties. This exception applies in situations where the state is regulating the fishing or hunting of a particular species in order to conserve that species.

The treaties do not expressly specify the geographical extent of the hunting right. In State v. Buchanan (1999), the Washington State Supreme Court ruled that this right extends to 1) the lands formally ceded by the tribes to the United States as those lands are described in the Treaties; and 2) other areas where it can be shown that those areas were “actually used for hunting and occupied [by the tribe] over an extended period of time.” The court did not provide a formal mechanism to evaluate and determine traditional hunting areas.

In December 2000, as a result of the Buchanan decision, WDFW, with the assistance of the State Attorney General's (AG) office, entered into an agreement with the four nations that signed the 1854 Medicine Creek Treaty (Puyallup, Nisqually, Muckleshoot and Squaxin Island), and prosecutors for Thurston, Mason, Lewis, Pierce, and Grays Harbor counties. Because of an imprecise description in the treaty, the location of the southern boundary of the Medicine Creek cession area had been a source of disagreement between the Medicine Creek tribes and the state.

The intent of the agreement was to use independent mediators with technical expertise in geography and law to determine a useable southern boundary of the area ceded by the Medicine Creek tribes. This determination, in turn, would be used by state and tribal managers to craft scientifically sound wildlife management plans and provide biologists with the certainty needed to carry out their work.

Federal and state courts have ruled that public land is “open and unclaimed” unless it is being put to a use that is inconsistent with tribal hunting. For example, in U.S. v. Hicks, a federal district court ruled that the Olympic National Park was not “open and unclaimed” because one of its purposes is the preservation of native wildlife and because hunting is generally prohibited in the park. In contrast, national forests have been held to be “open and unclaimed.” In State v. Chambers (1973), the Washington Supreme Court stated that private property is not “open and unclaimed,” but a tribal hunter may not be convicted unless such private property has outward indications of private ownership observable by a reasonable person.