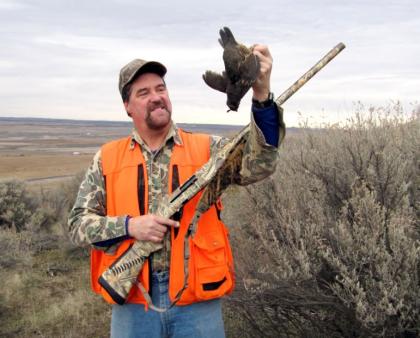 The mountain quail, largest member of the quail family, may weigh over half a pound and measure 11 to 12 inches in length. Its head plume (top knot) is taller and straighter than that of the valley quail, especially when standing on the ground or perched. Males and females look very much alike, with chestnut-colored throat patches and chestnut sides with wide, white bars. They tend to travel in small coveys, usually five to 10 birds. Most common in California, Oregon and parts of Western Washington, they’re the only quail that makes an annual migration, moving upslope into the high country during the spring and returning to the lowlands in the fall.

Originally found from southern Oregon to the sound end of the Baja Peninsula and as far east as the western edge of Nevada, the valley quail has been introduced throughout much of the West, including Hawaii and British Columbia. Both males and females sport a curving plume, comprised of several small feathers, that droops forward. The male’s plume is larger and darker. Males have a dark brown cap and a black face edged in white, a brown back, a grey-blue chest and a light brown belly. Females and immature birds are mainly grey-brown with a light-colored belly. A covey of valley quail may range from a dozen to several dozen birds.

Quail tend to feed most actively in the morning and late afternoon, so those are the best times to pursue them in and around grain fields and places where weed and grass seeds are readily available. They also pick grit before these morning and afternoon feeding sessions, so don’t overlook roadside cover at the edges of lightly travelled back roads and off-road trails. Quail may also use these areas to carry out one of their favorite mid-day pastimes, dusting. Mid-day also finds quail resting, often in moderate to heavy cover, or taking water, especially during periods of warm and/or dry weather.

As with other upland game birds, quail can be taken by hunters without a dog. One strategy is to drive or hike back roads, looking for tracks, droppings and dusting holes that indicate there may be birds nearby. When you find evidence of birds, walk the edge of the road in short bursts, stopping often near patches of roadside cover. Each time you stop, wait at least 15 or 20 seconds before moving on; if there are quail hiding nearby, they’re likely to get nervous and take to the air. The same stop-and-go strategy may also work for a lone hunter in relatively open areas with scattered patches of low or moderate cover. If they haven’t been hunted too hard, quail may hold in those available hiding spots rather than breaking into the open or taking flight as you approach. Move quickly from one patch of cover to the next, but stop at each one for a short time before moving on.

Another sometimes-successful tactic for the dogless quail hunter is to hunt in groups of three or more, alternately “playing dog” for each other. The idea is for one or more hunters to push through areas of heavy cover and flush birds into the open ahead of their hunting partners on either flank or to a blocker at the far end of the cover strip. This technique works best in fairly small areas and in narrow ribbons of cover; if the cover patch is too large quail may simply run or, if they do flush, stay within their brushy haven and refuse to fly into the open.

A well-trained and disciplined dog, of course, can do a better job of playing dog than a human can, and will certainly help put more quail in the bag. The pointing breeds can be a great asset, especially in low cover and open, shrub-steppe country, but a tough flushing dog might offer an edge in the kinds of thick cover where valley quail often hide. Whatever the breed, a dog that does a decent job of retrieving will more than earn its keep by locating downed quail that we humans would never be able to find.

Whether you hunt open country or thick cover, with or without a dog, you’re likely to bag more quail if you listen as well as look for your quarry. Quail are pretty “talkative” birds, using various calls and clucks to communicate with each other, and hunters can use that bird talk to their advantage. When a covey is scattered, birds will often emit a sort of crowing whistle to locate each other, and a chorus of such calls may erupt around dusk, as birds begin to roost for the night. Hunters can often get the chorus started with a quail call, and use the responses to help pinpoint likely hunting spots for the next morning. While hunting—if you hunt quietly and listen closely—you may even be able to hear the soft clucking sound that quail often make while they’re feeding.

A common scenario for quail hunters is to raise a covey and get one or two shots if they all take flight at once, or perhaps stand and shoot several times if birds raise one or two at a time and there’s an opportunity to re-load between take-offs. When they scatter, quail may fly long distances, never to be seen again (at least not that day), or they may settle to the ground only a few dozen yards away and you can spend the next hour flushing singles and doubles. Those singles and doubles will sometimes hold very tight once they hit the ground, letting a hunter or dog walk right up on top of them before they fly. Those are the rises that may just about cause cardiac arrest, but also tend to provide a hunters with the longest possible reaction time for a good shot.

If you raise a covey in or near trees and tall bushes, quail may resort to the frustrating tactic of simply flying up and perching in the overhead limbs, giving you no time for a wing-shot. Shooting sitting quail off tree limbs is the bird-hunting equivalent of shooting fish in a barrel, so you my find yourself resorting to throwing rocks and sticks to get them to take flight. It may be easier and more productive to walk away and return 30 to 60 minutes later, in hopes they’ll have returned to the ground and can be flushed again.

Quail are among the smallest of game birds, and it doesn’t take a large-bore gun or a heavy load of large shot to bring them down. And, because quail hunting often involves quick shots in tight cover at small, fast-moving targets, a smaller, lighter gun may produce better results than a larger, heavier one. Many quail hunters favor a 20-gauge double-barrel—either over/under or side-by-side—or semiautomatic; multiple-shot opportunities are common, so a single-shot gun isn’t a good choice. A fairly open choke—skeet or improved cylinder—is well-suited to most quail-shooting situations.

That’s not to say that your favorite 12-gauge won’t work, especially if you’re likely to encounter pheasant, a distinct possibility in quail country. The bigger gun offers a second advantage, more pellets in the pattern, and more pellets mean a greater likelihood you’ll hit what you’re shooting at.

As mentioned earlier, those pellets needn’t be large. One small pellet is often enough to bring down a quail. Size 7 ½ and 8 lead shot are standard among quail hunters, and some go as small as 9’s. If you’re shooting steel, 6’s and 7’s are the norm. Shot loads (with lead) range from one-ounce 20-gauge loads to 1 ¼-ounce loads in a 12-gauge. Equivalent steel loads would be a little lighter.

The rise of a quail can be quite unpredictable, and when a dozen or more take flight at the same time it can be downright nerve-wracking. Many a quail hunter, suddenly overwhelmed by a cloud of little gray rockets going off in every direction, has stood there stunned, failing to even bring the shotgun to his shoulder until the whole thing was over. The problem is that just when you think you know what quail are going to do, they change tactics. Sometimes they’ll rise at a pretty sharp angle and get into the open quickly, but just as often they’ll streak off low to the ground, dodging through weeds and low-hanging limbs rather than going over them. The tendency of most hunters is to shoot too high, especially at birds that are going straight-away. Shooting just under those birds will pay much better dividends. But be careful with those low-angle shots, especially if you’re shooting over a dog.

It’s been said that shooting quail is like learning to ride a bicycle; you just have to keep trying until you get the hang of it. It might help to remember that, because of their small size, they appear to be flying faster than they really are, and you have more time to shoot than you might think. That advice, of course, is more valuable if you’re hunting in relatively open country and really do have more time to shoot; if you’re hunting thicker cover with lots of trees and bushes for birds to dodge into, you really won’t have much time to react and get off a shot.