Non-spot shrimping continues in most of Puget Sound 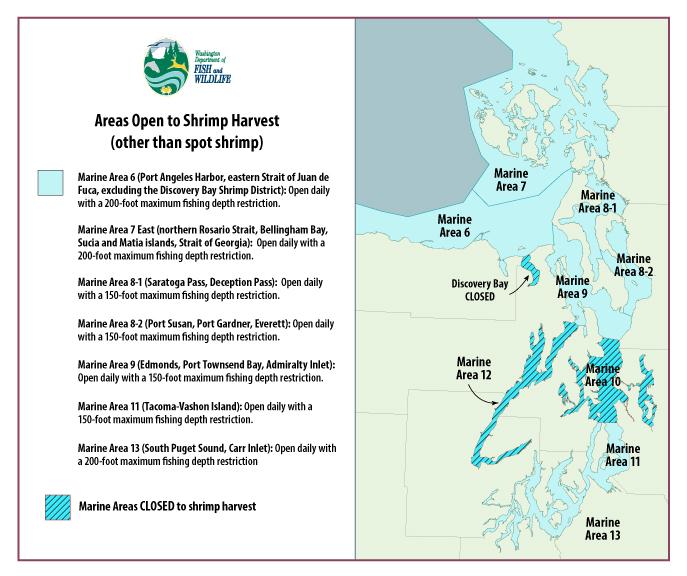 “Shrimpers were very successful this year in Hood Canal, harvesting the quota in just five days of fishing” said Bosley. “The number of harvesters catching full limits in Hood Canal increased from 43 percent in 2019 to 68 percent this year.”

The great harvests in this area were largely mirrored across the sound, added Bosley.

Though spot shrimp season is coming to a close in most areas on Puget Sound, residents can still enjoy time on Puget Sound going after sidestripe, coonstripe, dock, and pink shrimp.

Open dates for shrimp other than spot shrimp

The daily non-spot shrimp limit is 10 pounds total for all shrimp species retained; spot shrimp can no longer be kept. All spot shrimp caught must be immediately returned to the water unharmed. Pots with a minimum ½ inch mesh are now allowed. Larger mesh pots may be used but are generally less productive for species smaller than spot shrimp.

A valid 2020-21 combination license, shellfish license, or Fish Washington license is required to participate in the fishery.

WDFW managers remind shrimpers that traps can be set one hour before official sunrise during any open period in the marine areas. The pots must be removed from the water in these same areas by one hour after sunset at on the final day of an open period.

It is important that fishers wear their masks, follow physical distancing protocols and #recreateresponsibly, especially as they return to the dock, where crowding can occur.