People can call (360) 466-4345, ext. 266, to report swans that have died or need help in Whatcom, Skagit, Snohomish, and other western Washington counties. Callers should be prepared to leave a short, detailed message including their name and phone number, location and condition of the swans. The hotline is available 24/7 through March. 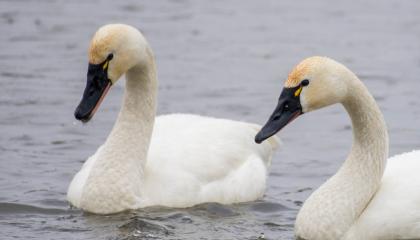 “Because of the recent cold temperatures to the north, we are seeing swans throughout western Washington a little early this year,” said Kyle Spragens, WDFW waterfowl section manager. “We typically start to see them arrive in significant numbers just before Thanksgiving – but it all depends on temperatures hundreds to thousands of miles away, as these birds spend their summers in Alaska, western Yukon, and northern British Columbia.”

Some trumpeter and tundra swans in Washington and in southwestern British Columbia die each winter from lead poisoning after ingesting lead shot and other lead objects in areas where they feed.

Lead shot has been banned for waterfowl hunting in Washington since 1991. But swans can still pick up and ingest lead shot while foraging in shallow underwater areas, in fields and roosts where lead is still present. Swans are also vulnerable to collisions with powerlines.

“We advise people who observe sick, injured, or dead swans not to handle or collect the birds,” added Spragens. “Instead, people should call the hotline.”

It is through these reports that WDFW and partners, including Puget Sound Energy employees, as well as volunteers from the Northwest Swan Conservation Association, know where to pick up these birds.

Through this process, Whatcom Humane Society saved and rehabilitated four trumpeter swans last season - one of which was sighted again near Whitehorse, Canada 70 days after release. WDFW and other agencies and organizations have been working since 2001 to locate sources of toxic lead and minimize potential exposure through management actions.

The department also has a blog to help the public learn more about swan populations and viewing opportunities.

The Washington Department of Fish and Wildlife is the state agency tasked with preserving, protecting and perpetuating fish, wildlife, and ecosystems, while providing sustainable fishing and hunting opportunities.