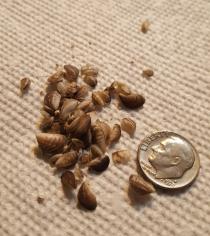 While working the boat check station on the Washington-Idaho border just east of Spokane this past weekend, Puddles discovered invasive mussels on a boat traveling from Lake Havasu, in Arizona. The boat had already been decontaminated at three previous Montana and Idaho decontamination sites, and mussels removed, before Puddles’ nose was able to detect what human eyes had missed; tiny invasive mussels hidden behind part of the boat’s sonar system. Without a canine partner like Puddles, these mussels would not have been found and could have ended up costingmillions of dollars in damage in a body of water that doesn’t already have invasive mussels.

Invasive mussels, such as quagga and zebra mussels. have been spreading across North America since the 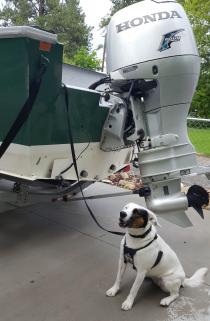 1980s. The Columbia River is the only basin in the U.S. that remains mussel-free. Mussels render beaches unusable, clog water filtration pipes, and destroy boat engines.

The U.S. Fish and Wildlife Service estimates that if zebra and quagga mussels invade the Columbia River, they could cost hydroelectric facilities up to $300 million a year, and cause hundreds of millions more in costs associated with environmental damage and increased operating expenses to fish hatcheries and water diversions.

Puddles is just one weapon in the fight against invasive mussels. She was initially surrendered to an animal shelter in Fresno, California where she caught the attention of the Green Dog Project’s “Rescued for a Reason” program. Staff at the Green Dog Project contacted Mussel Dogs, in Oakdale California, and Puddles was trained to detect mussels using her sensitive nose. WDFW received a grant from the Bureau of Reclamation to purchase Puddles for their Aquatic Invasive Species Check Station program.

The public can do its part to prevent the spread of invasive species by cleaning, drying, and draining watercraft, including kayaks and other non-motorized vessels, every time they are taken it out of the water. This includes drywells and gear that was in the boat as well. Also, stop at every boat check. Find more information on aquatic invasive species, and stopping their spread, on WDFW’s website.

WDFW is the primary state agency tasked with preserving, protecting, and perpetuating fish, wildlife, and ecosystems, while providing sustainable fishing and hunting opportunities.