WDFW employees will be furloughed Friday, July 17. Most services will be impacted.
For the latest WDFW closures, restrictions, and updates see the WDFW COVID-19/Coronavirus response page.

What to do if you cross paths with a moose 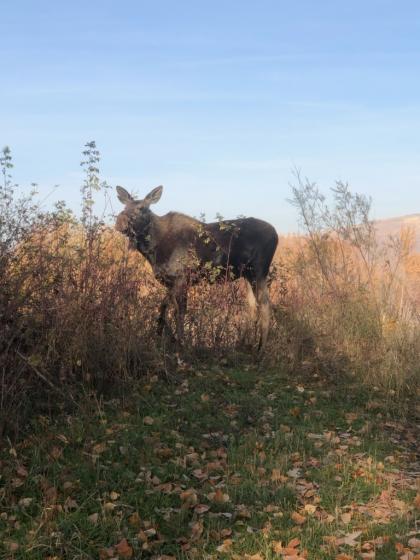 WENATCHEE, WA – Those visiting the Horan Natural Area in north Wenatchee lately may have encountered a yearling cow moose. The moose most likely wandered into the area after leaving its mother as moose calves generally disperse to find new territory around a year old. Reports of the animal in the area have been frequent since July.

Washington Department of Fish and Wildlife (WDFW) is joining Washington State Parks Department and Chelan County Public Utility District (PUD), who partner to manage the natural area, in making the public aware that they may encounter the moose on or close to trails. While she appears docile, moose are wild animals and should be treated with caution and respect.

To minimize encounters between humans and wildlife in the Horan Natural Area, State Parks, and Chelan PUD will close a section of trail earlier than normal. The main reason for the trail closure is to protect nesting bald eagles, but it also will benefit the moose, as well as people hiking with their dogs.

Moose are not easily spooked and do not fear humans. A minimum safe distance from a moose is at least 50 yards. To avoid close encounters, officials encourage the public to stay safe and remember these tips:

Signs of aggression in moose include raised hair on the neck, lowering the head and putting the ears back, swaying back and forth, snorting, and licking the snout.

Moose prefer areas with forest, marshes, and wetlands. As of 2015, there were approximately 5,000 moose in Washington State, with the majority in the Selkirk Mountains and smaller populations in the north Cascades, Okanogan, and Blue mountains. Although they have declined substantially since then in the Selkirks, they appear to have increased in Okanogan and Chelan counties.

The Washington Department of Fish and Wildlife is the primary state agency tasked with preserving, protecting, and perpetuating fish and wildlife and ecosystems, while providing sustainable fishing and hunting opportunities.