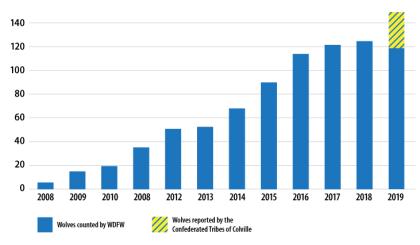 reached their highest levels since wolves were essentially eliminated from the state in the 1930s. The annual year-end wolf report was released today by the Washington Department of Fish and Wildlife (WDFW).

"The population continuing to recover is good news for wolf conservation but it can also bring additional challenges.  Last year was particularly tough for wolf-livestock conflict management,” said WDFW Director Kelly Susewind. "We are working with citizens and communities to strike a balance so both livestock producers and wolves can share the landscape and thrive in Washington.”

In 2019, one of WDFW’s partners in wolf management, the Confederated Tribes of the Colville Reservation (CTCR), changed their methodology for counting wolves. So for the 2019 annual count, the Department is reporting the counts separately.

As of December 31, 2019, WDFW counted 108 wolves in 21 packs, and CTCR reported 37 wolves in five packs. The two counts combined represent an eleven percent increase in the wolf population over the previous year. Ten of the packs WDFW monitored were documented as successful breeding pairs. Using the new methodology, CTCR didn’t collect information on breeding pairs. Because this is a minimum count, the actual number of wolves, packs, and successful breeding pairs in Washington is undoubtedly higher.

The CTCR changed count methodology because they consider wolves recovered on their lands. As a result, the same resources that have been put into year-end surveys by both WDFW and CTCR in the past - activities like track, aerial, and camera surveys - were not used for 2019 on the reservation. Instead, this year’s numbers provided by CTCR reflect winter numbers incidentally gathered from hunters, trappers, and public observations, which means they may come with additional uncertainty.

Two new wolf packs were confirmed in 2019, while another may have disbanded. The new Sullivan Creek Pack formed in Okanogan County.  Wolves re-established a territory in the Kettle Mountains, in an area formally occupied by the OPT Pack in northeast Washington. That new pack is called the Kettle Pack. WDFW surveys indicated a single wolf maintained the Diobsud Creek territory this winter, which had been considered the only Western Washington pack, but no longer meets the definition of a pack for 2019.

The 2019 wolf counts increased from a year ago when WDFW reported 97 wolves in 22 packs and CTCR reported 36 wolves in 5 packs. While the overall minimum number of wolves in the state is up in 2019 compared to 2018, the number of packs and breeding pairs were slightly lower.

“As the wolf population begins to recover, we’re going to see population growth slow in parts of the state where the local population is nearing capacity,” said statewide wolf specialist Ben Maletzke. “It’s a natural occurrence that happens in many wildlife populations and is even more pronounced in a territorial carnivore. Similar to what we would expect, we are seeing the number of packs and the number of individuals level off in northeast Washington while new packs continue to form in the North Cascades recovery area.”

Each year’s population total reflects population losses as well as gains. WDFW documented 21 wolf mortalities during 2019: one was killed by a cougar, one died of unknown causes, two were killed by landowners protecting livestock, one killed by a landowner due to a perceived threat to human safety, one is still under investigation, and six were legally harvested by tribal hunters. Nine wolves were lethally removed by the Department in 2019 in response to attacks on livestock.

The majority of packs, 85 percent, were not involved in known livestock or other animal depredations last year. WDFW investigators confirmed 14 cattle killed by wolves in 2019, plus one more probable instance, and another 11 cattle that were injured. This represents a slight decrease over wolf-livestock conflicts that occurred in 2018.

“We had more negative impacts to cattle and lethal removals last year than we’d like to see. It’s been a challenging situation, but ranchers are continuing to play an important role in reducing wolf-livestock conflict,” said WDFW wolf policy lead Donny Martorello. “And we are starting to see local, grass-root efforts to improve the use and effectiveness of non-lethal deterrents.”

Since 1980, gray wolves have been listed under state law as endangered throughout Washington. In the western two-thirds of the state, they are classified as endangered under the federal Endangered Species Act and are managed by the U.S. Fish and Wildlife Service. In eastern Washington, WDFW manages the species consistent with the 2011 Wolf Conservation and Management Plan.

Contributors to WDFW's annual report include the U.S. Fish and Wildlife Service, the U.S. Department of Agriculture's Wildlife Services program, the Confederated Tribes of the Colville Reservation, and the Spokane Tribe of Indians.

The full Washington Gray Wolf Conservation and Management 2019 Annual Report and a video summary is available from the Department’s website.

Persons with disabilities who need to receive this information in an alternative format or who need reasonable accommodations to participate in WDFW-sponsored public meetings or other activities may contact Dolores Noyes by phone (360-902-2349), TTY (360-902-2207), or email (dolores.noyes@dfw.wa.gov). For more information, see https://wdfw.wa.gov/accessibility/reasonable_request.html.