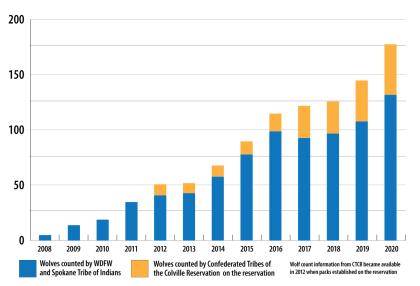 Washington's wolf population continued to grow in 2020, as the minimum count of wolves reached its highest levels since the species began returning to Washington in recent years. The annual wolf report was released today by the Washington Department of Fish and Wildlife (WDFW).

As of Dec. 31, 2020, WDFW counted 132 wolves in 24 packs and the Confederated Tribes of the Colville Reservation (CTCR) reported 46 wolves in five packs in Washington. Thirteen of the packs WDFW monitored were documented as successful breeding pairs. Because this is a minimum count, the actual number of wolves, packs, and successful breeding pairs in Washington is likely higher.

These numbers compare with 2019’s count of 108 wolves in 21 packs and 10 breeding pairs counted by WDFW, and 37 wolves in five packs reported by the CTCR. That is a 24% increase in the wolf population and marks the 12th consecutive year of population growth.

Four new packs formed in areas monitored by WDFW in 2020. The Navarre Pack formed in Okanogan County, the Vulcan Pack in Ferry County, the Onion Creek Pack in Stevens County, and wolves also reestablished in the area formerly occupied by the Skookum Pack in Pend Oreille County.

Seventy-nine percent of the known wolf packs in Washington were not involved in any known livestock depredation in 2020, while seven packs were.

Each year, population totals reflect population losses as well as gains. WDFW documented 16 wolf mortalities during 2020, including eight legally harvested by tribal hunters, one killed by a vehicle, two of natural causes, one that was shot due to a perceived threat to human safety, one of unknown causes, and three lethally removed in response to wolf-caused livestock deaths.

Since 1980, gray wolves have been listed under state law as endangered throughout Washington. In January of 2021, wolves were federally delisted from the Endangered Species Act and are currently managed statewide by WDFW as a state endangered species. WDFW works to conserve and manage wolves consistent with its wolf plan adopted in 2011.

Contributors to WDFW's annual report include the U.S. Fish and Wildlife Service, the U.S. Department of Agriculture's Wildlife Services program, the Spokane Tribe of Indians and the CTCR. The CTCR considers wolves recovered on their lands and no longer allocates resources to organized year-end counting of wolves, and therefore did not document breeding pairs as they have in past years. Numbers provided by CTCR this year reflect those incidentally gathered by biologists, hunters, trappers, and public observations, rather than dedicated counts.

The full Washington Gray Wolf Conservation and Management 2020 Annual Report is available from the Department’s website at wdfw.wa.gov. A video summary will be posted soon.