OLYMPIA – The waters where the Pacific Ocean meets the Strait of Juan de Fuca will reopen to saltwater fishing June 20, the Washington Department of Fish and Wildlife (WDFW) announced today. The announcement follows similar reopenings last month along the rest of Washington’s Pacific coastline.

The Department also announced this year’s summer ocean salmon fishing seasons, which will kick off June 20 in all four coastal marine areas, and proposed dates for ocean halibut fishing beginning in August. 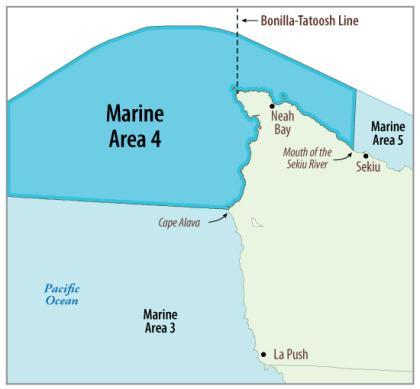 Marine Area 4 (Neah Bay), which includes the waters from Cape Alava on the Olympic Peninsula north to the mouth of the Sekiu River along the Strait of Juan de Fuca, will reopen to bottomfish and shellfish – including mussels, clams, and oysters – beginning  Saturday, June 20. Crabbing also reopens west of the Bonilla-Tatoosh line, which runs from the Tatoosh Island Lighthouse north to Bonilla Point on Vancouver Island, but remains closed east of the line.  There are a number of additional restrictions that anglers also need to be aware of before heading out.

The Makah Reservation, including marinas and all services, remains closed to visitors. Neah Bay on the Makah Reservation represents the primary direct boat access in Marine Area 4, and as a result, those fishing in this area will have to launch from and land in other areas. Anglers fishing in Marine Area 4 will still have to follow all rules and regulations for that area, regardless of where they return with their catch.

“Anglers fishing in Marine Area 4 but returning to other coastal ports will need to make sure that they’re sticking to limits and following the rules for that area,” said Larry Phillips, coastal region director with WDFW. “That means they can’t get their limit in Marine Area 4, then head over to Marine Area 5 and continue fishing. These rules are necessary to respect local communities’ wishes and help keep people safe, while also supporting conservation and management objectives.”

La Push, located on the Quileute Reservation to the south, also remains closed to the public.

Anglers will need to continue following other state guidelines by staying close to home, traveling only with family or other members of their immediate household, and practicing physical distancing by keeping 6 feet apart. Anglers should also be sure to check ahead of time if their preferred fishing destination or launch area is open; many launches and beaches are managed under local, tribal, or federal jurisdiction, and may not be operating normally.

With Marine Area 4 reopening, sport anglers will also have the opportunity to reel in salmon off Washington’s coast starting Saturday, June 20.

The season will begin with a Chinook-only fishery with a one-salmon daily limit for all areas June 20-28. Coho may not be retained during this period. Beginning June 29, daily limits increase to two salmon per angler in all areas, and unmarked coho must be released. In areas 1 and 2, only one of those two salmon may be a Chinook. Also beginning June 29, Marine Area 2 will be open Sundays through Thursdays, and closed Fridays and Saturdays. Areas 1, 3 and 4 will remain open 7 days per week.

Willapa Bay (Area 2-1) and the portion of Grays Harbor (Area 2-2) west of the Buoy 13 line also open June 20 under the same rules as Area 2. Regulations for Areas 2-1 and 2-2 change in August, and details are listed in the Sport Fishing Rules Pamphlet. The 2020-21 edition of the pamphlet will be available in late June.

All four marine areas are scheduled to close Sept. 30, but Beeghley noted that areas could close earlier if the quota is met.

Throughout the summer, anglers can check WDFW's webpage at https://wdfw.wa.gov/fishing/reports/creel/ocean for updates.

Coastal halibut fishing remains closed for now, but WDFW has been working with stakeholders this spring to discuss options for re-opening ocean halibut fishing in August.

“While we realize August is still a ways out, we also want to be open with anglers who we know are eager to plan halibut trips this summer,” said Heather Hall, WDFW’s intergovernmental ocean policy coordinator. “We’ve worked hard to develop an approach that will help maximize anglers’ time on the water, bring that economic value back, and continue to keep everyone safe."

Hall added that the delayed fishery may benefit halibut anglers and their families since ocean conditions should be better in August than when the fishery usually opens in May.

These dates are tentative and subject to change due to impacts from the ongoing COVID-19 pandemic in the state.

WDFW is proposing coastal halibut fishing for the following dates and areas:

North Coast (Marine Areas 3 and 4): Opens Thursday, Aug. 6. The fishery in this area will be open three days per week, Thursdays, Fridays, and Saturdays, Aug. 6 through Sept. 30 or until the quota is taken.

South Coast (Marine Areas 1 and 2): Open Thursday, Aug. 6. Then, beginning Aug. 13, open two days per week, Thursdays and Sundays, through Sept. 30 or until the quota is taken. If catch and effort is tracking slower than anticipated, additional days may be added. Proposed additional dates are Friday, Aug. 28; Friday, Sept. 4; and Friday, Sept. 11.

Anglers should check the Washington Sport Fishing Rules pamphlet at https://wdfw.wa.gov/fishing/regulations and WDFW’s emergency rules page at https://fortress.wa.gov/dfw/erules/efishrules/ before heading out, and download the Fish Washington mobile app for up-to-date regulations at their destination.

The Governor’s Office authorized guide and charter fishing services to reopen on May 14, though they are subject to a number of new requirements, including a limit on the number of passengers depending on their home county’s phase of reopening. More information about those requirements can be found at https://www.governor.wa.gov/sites/default/files/COVID19Phase1and2OutdoorRecreationGuidancePart2.pdf.