The ONLY land access to the public beach at Potlatch State Park and Potlatch DNR is through the Park’s main parking lot. Parking is PROHIBITED at all times along the Highway 101 shoulder between milepost 335.07 (entrance to Potlatch State Park) and south to milepost 335.72 (northbound slow vehicle turnout). Property east of Potlatch DNR is privately owned. Trespassing and parking restrictions are being enforced.

Please take care not to cover oysters with sand and mud while digging clams because this will potentially kill the oysters. Potlatch State Park has over a mile of tidelands, but some areas provide better digging for different species. The stretch of beach that is closest to the highway is regularly harvested by recreational diggers, and good numbers of Manila clams can be found here. Manila clams can be found throughout the middle and upper intertidal zones, with greatest abundance on the large tide flat at the southern end of Annas Bay where the park’s shoreline turns easterly. Native littleneck clams are present throughout the beach, but in lower abundance and usually lower in tidal elevation than Manila clams. The best digging for butter clams is in front of the main parking area in the lower intertidal zone. Butter clams are also common in the lower intertidal zone throughout the south end of the beach. Varnish clams are found in great abundance all along the southern shoreline of Potlatch State Park and Potlatch DNR, usually in the upper intertidal zone. Eastern softshell clams can be found at Potlatch State Park, particularly in areas with freshwater influence from Enetai Creek (also the site of the Skokomish Fisheries Department fish trap).

Tidelands to the east of the Potlatch DNR boundary are owned by The Skokomish Tribal Nation. Non-consumptive recreational use is permitted. All shellfish harvest is strictly prohibited on these tidelands. (See Beach Map) 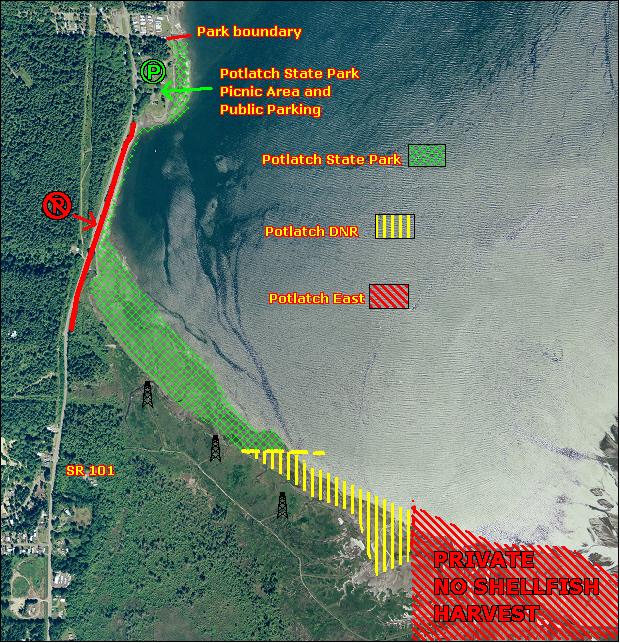 Disclaimer: Map areas identify approximate public property boundaries and should not be considered legal property boundaries. Many of these public beaches have no upland entrance and must be accessed by boat. Please respect adjacent private property. This map is provided for informational purposes only. The accuracy of this map is not guaranteed.
Directions

From the south (Shelton and Olympia) travel north on Highway 101 through Shelton and continue for about 12 miles. Look for the state park signs and entrance on the right hand side of the road just after Highway 101 reaches the shore of Hood Canal.

From the north on Highway 101 (Quilcene, Port Angeles) travel south through the town of Hoodsport and continue for about another two and a half miles to Potlatch State Park. The park entrance is on the left and is well marked on the highway.

Trespassing and parking restrictions are being enforced. The ONLY land access to the public beach at Potlatch State Park and Potlatch DNR is now through the Park's main parking lot.

Parking is PROHIBITED at all times along the shoulder between milepost 335.07 (entrance to Potlatch State Park) and south to milepost 335.72 (approximately where Hood Canal is no longer visible from Highway 101). Also, the strip of land between the highway turnout and the public beach is privately owned; there is no longer ANY access to the public beach from the highway turnout.

Potlatch State Park has restrooms, showers, potable water, camping and picnic areas. There are no facilities at Potlatch DNR.