McMicken Island State Park is accessible by boat only. There is no upland access to this beach. 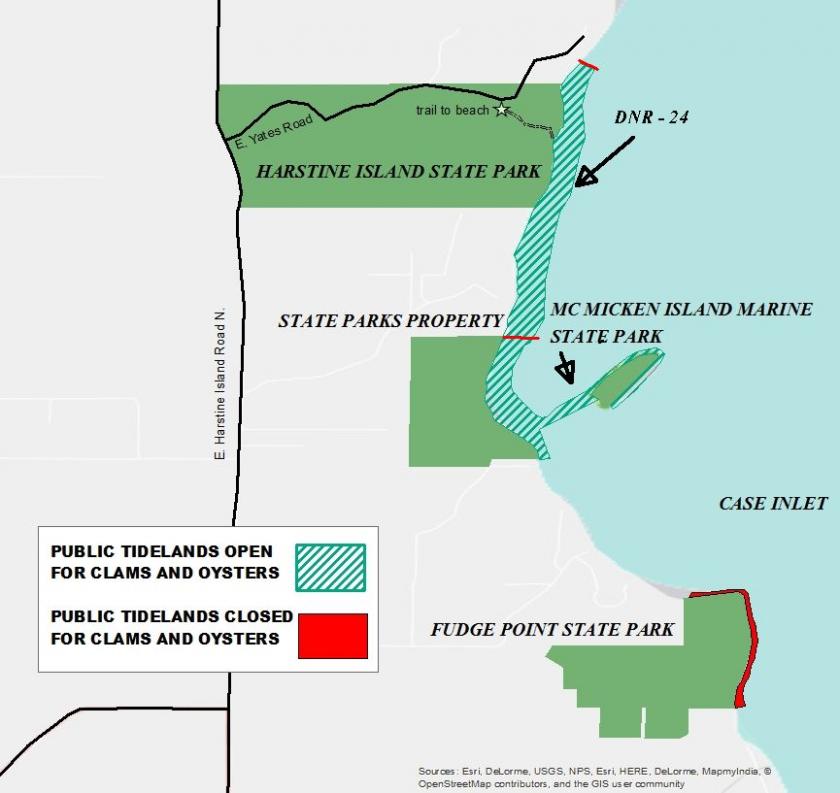 Disclaimer: Map areas identify approximate public property boundaries and should not be considered legal property boundaries. Many of these public beaches have no upland entrance and must be accessed by boat. Please respect adjacent private property. This map is provided for informational purposes only. The accuracy of this map is not guaranteed.
Directions

McMicken Island State Park is located in south Puget Sound on the east side of Harstine Island (see beach photo). It is known primarily as a boat access beach, but it can be accessed at low tide via the land bridge (tombolo) that connects the island to Harstine Island. See DNR-24 for land access. Nearest boat ramps: Harstine Ramp (Latimer's Landing), located about 10 miles north of Shelton via Pickering Road, is about 10 miles by boat to McMicken Island. Fair Harbor Marina ramp (Grapeview Ramp), located about 4 miles south of Allyn on Grapeview Loop road, is about 6.5 miles by boat from McMicken Island.

There are two vault toilets and moorage buoys at McMicken Island State Park, but no other facilities are present. The park does not have potable water or garbage service. Visitors need to pack out what they pack in.

A surveyor employed by the US government reportedly named McMicken Island after himself. The State of Washington purchased McMicken Island in 1974 for $133,000. Harstine Island - often spelled Hartstene, Harstene, and Hartstine - was named for Lieutenant Henry J. Hartstein, a member of the Wilkes Expedition. Later in life, Hartstein and his wife changed their surname to "Hartstene" to avoid people mispronouncing it, and mapmakers followed suit. The current spelling of "Harstine" was made up by island residents and mapmakers in the early 1900s, and the Washington Legislature made that spelling official in 1997. Other islands in southern Puget Sound named for members of the Wilkes Expedition include Maury Island and Stretch Island (after the gunners mate Samuel Stretch).