Every June, we join alongside our partners in celebrating Orca Action Month to bring awareness to progress together to save our Southern Resident Killer Whales from the brink of extinction.

In addition to having served on Governor Inslee's Southern Resident Orca Task Force, some of our other efforts to support southern resident killer whale recovery include:

With boating season right around the corner, it's a great time to review regulations and best practices that support Southern Resident killer whale survival. 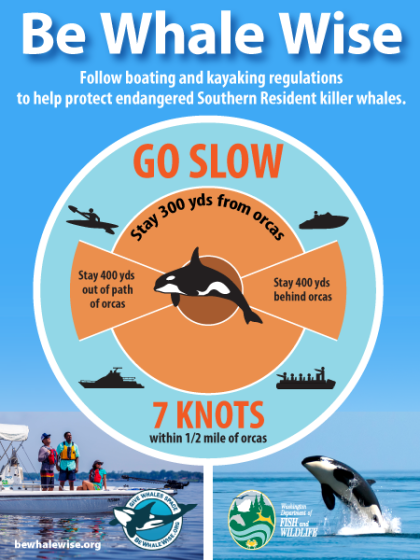 Vessel traffic can interrupt echolocation clicks the whales use to track and capture fish. A key finding from research that National Oceanic and Atmospheric Administration (NOAA) Fisheries published earlier this year indicated this is especially prominent in females, which often give up foraging when boats approach within 400 yards. Research shows this may be most concerning in pregnant or nursing mothers that must support calves.

Further emphasizing the cause for concern, only about one-third of the SRKW population is actively breeding. Of those breeding, not many pregnancies result in live calves, and even when they do, not many calves survive.

By following these steps below, recreational boaters can be a part of  the work to make a difference for the whales' ability to ability to move about, feed and socialize:

For more details about steps you can take as a recreational boater to keep the whales – and yourself! – safe, visit BeWhaleWise.org. For the guidelines in a printable version to keep aboard your boat, visit the Be Whale Wise website.

Classified as an endangered species, Southern Resident killer whales are a beloved icon of the Pacific Northwest, holding significant cultural value to native tribes. In addition, the whale-watching industry contributes up to $60 million per year to Washington's economy and supports hundreds of jobs in the Puget Sound region. Learn more about the killer whale and its habitat on our killer whale web page.

Three primary threats to the whales are:

Despite their endangered listing, the southern resident killer whale population has continued to decline, signaling that they need additional intervention in their recovery. WDFW is committed to conserving and protecting these orca whales and is working tirelessly to support their return from the brink of extinction. In addition to serving on Governor Inslee's Southern Resident Orca Task Force, some of our recent efforts to support southern resident killer whale recovery include:

WDFW's progress has been hand-in-hand with legislative support for orca recovery. Recent WDFW efforts thanks to funding from the Washington state Legislature include:

How you can help

State and federal policies and management