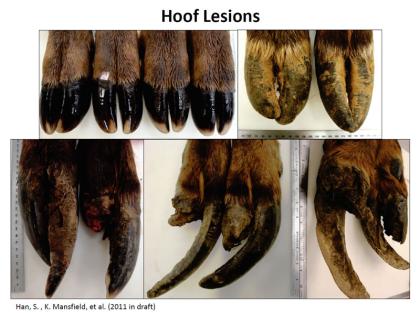 Since 2008, reports of elk with deformed, broken, or missing hooves have increased  in southwest Washington, with some observations west of the Cascade Range. While elk are susceptible to many conditions that cause limping or hoof deformities, the prevalence and severity of this new affliction – now known as treponeme-associated hoof disease (TAHD) – suggests something  different.

WDFW with a panel of independent scientists conducted diagnostic research  that found that these abnormalities were strongly associated with treponeme bacteria, known to cause digital dermatitis in cattle, sheep, and goats. Although this type of disease has plagued the dairy industry for decades, TAHD had never before been documented in elk or any other hooved wildlife species.

Since then, WDFW has continued to work with scientists, veterinarians, outdoor organizations, tribal governments, and others through its Hoof Disease Technical Advisory Group and Public Working Group to develop management strategies for TAHD-infected elk.

WDFW seeks to document and respond to the diseases that affect elk health in our state. You can help by reporting limping elk or dead elk with hoof deformities.

Several aspects of TAHD in elk are clear:

WDFW has confirmed cases of elk afflicted with TAHD in 17 Washington counties, primarily in the southwest region of the state. Efforts to formally estimate the prevalence and distribution of TAHD indicate the disease is most prevalent in Cowlitz, Wahkiakum, and the western half of Lewis counties. In April 2018, WDFW confirmed the presence of the disease in Klickitat County – the first such finding in Washington east of the Cascade Range.  WDFW detected TAHD in Walla Walla County in 2019 and in Kittitas county in 2020.

The Oregon Department of Fish and Wildlife has confirmed TAHD in elk populations in both western and eastern Oregon. The disease has also been confirmed in Idaho and recently in California.

How hunters and others can help

State wildlife managers are asking for your help to monitor and prevent the spread of TAHD in several ways:

Diagnosing and monitoring TAHD in elk

From 2009 - 2014, WDFW, the USDA National Animal Disease Center and four other diagnostic laboratories collected hooves and tissue from 43 elk    to find the cause of the disease. The samples were taken from elk in areas affected and not affected by the disease.

By 2014, all five laboratories identified treponeme bacteria in the diseased elk samples, but not in those from healthy elk. This finding provided evidence of the role of treponeme bacteria in causing the disease. A WDFW technical advisory group, composed of the State Veterinarian's office, state public health officials, university researchers, and other specialists independently reviewed and accepted WDFW’s diagnostic research. .

Since then, WDFW continues to partner with leading experts to better understand this disease, and has initiated a variety of field studies to assess the distribution and prevalence of the disease, along with its effect on elk survival, reproduction and recruitment. WDFW is also working closely with Washington State University's College of Veterinary Medicine Elk Hoof Disease Research team, which the legislature designated legislature as the state lead in assessing the causes and potential solutions for elk hoof disease in 2017.

View larger map
Also in this section
© 2022 All rights reserved.