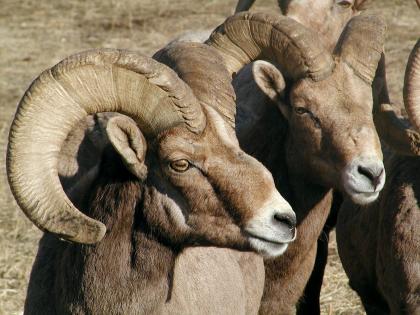 Washington is home to an estimated 1,690 wild bighorn sheep that range in 17 herds in central and eastern areas of the state. Many of these wild sheep can be easily seen from highways and roadways, such as those in the Yakima River Valley and along Highway 12 near Naches.

What causes pneumonia in bighorn sheep?

Bighorn sheep are highly susceptible to respiratory disease. Pneumonia outbreaks contributed to the historical extinction of bighorn sheep in Washington and continue to take a toll on reintroduced populations. The pathogen most closely associated with pneumonia in bighorns is not native to North America, and thus bighorns have not had evolutionary time to adapt to it.

Wildlife health researchers across the west have found that pneumonia in bighorns is most often associated with a bacterium named Mycoplasma ovipneumoniae, although other bacteria in the family Pasteurellaceae typically take advantage of its presence and cause death.

Domestic sheep can carry both M. ovipneumoniae and Pasteurellaceae, usually accompanied by few or no signs of disease. However, wild sheep are not adapted to these bacteria and, when exposed, often develop severe pneumonia and die. Following these outbreaks, some bighorn sheep become carriers of M. ovipneumoniae. This can cause disease and death in lambs that prevents population recovery. These carriers can also be a threat to nearby uninfected herds.

Is there a cure?

Unfortunately, there is no effective treatment or preventive vaccination for pneumonia in bighorn sheep. The bacteria that cause bighorn pneumonia are not infectious to humans.

Pneumonia outbreaks have killed bighorn sheep in other western states and in some Washington herds for decades. Herds in the Hells Canyon/Blue Mountains areas have been affected since the early 1990s. Infected bighorns were found in late 2009 and early 2010 in the Umtanum herd in the Yakima River Valley. In early 2013, a separate disease outbreak occurred in the Tieton Herd, near Naches. Because this outbreak was particularly lethal, the remaining animals were lethally removed to prevent spread to the adjacent, healthy Cleman Mountain herd.