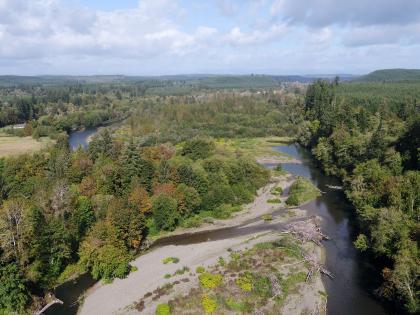 The 2,700 square-mile Chehalis River watershed is one of the state's only major river drainage systems with no salmon species listed as threatened or endangered. However, experts studying the basin report that salmon runs have declined as much as 80% due to a combination of lost and damaged habitat, changing climate conditions, and development.

Scientists, researchers, and technical specialists say if no action is taken in the basin, spring chinook salmon could become nearly extinct by the end of the century.

Climate change in particular is bringing more frequent and intense fall and winter storms, spring and summer drought, and rising water temperatures to the basin. In fact, five of the largest floods in the Chehalis basin’s history have occurred in the last 30 years.

Washington State, local leaders, and people of the Chehalis basin are in a position to help address these challenges through the Chehalis Basin Strategy. The Strategy is an ambitious collection of potential actions to improve and restore river habitat and reduce flood damage. It will be a basin-wide strategy that includes near- and long-term actions, as well as small- and large-scale projects. The long-term goal of the Strategy is to make the basin a safer place for families and communities impacted by flooding, and to improve and restore aquatic species habitat now and for future generations.

To help address the downward trend of salmon runs, representatives from the Quinault Indian Nation, Confederated Tribes of the Chehalis Reservation, Washington Department of Fish and Wildlife, and other technical experts developed a draft aquatic species restoration plan aimed at protecting and restoring aquatic habitat in the basin.

Together, the team worked with farmers, foresters, conservationists, the Department of Ecology’s Office of Chehalis Basin, other state agencies, and local governments to help shape the plan.

The science-based draft restoration plan identifies potential actions with the voluntary support of willing landowners that offer the best chance to:

The public was invited to comment on the draft restoration plan through Jan. 14, 2020. To review the plan, visit http://chehalisbasinstrategy.com/asrp/.