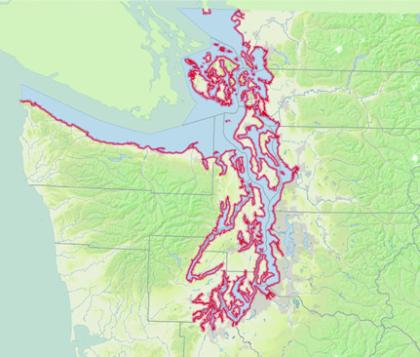 Puget Sound has over 2,500 miles of shoreline from the Canadian border to Olympia and out to the tip of Cape Flattery. The region’s shorelines, bays, and river deltas are created and sustained over time through natural processes including tidal flow, wave energy, freshwater input and sediment supply, transport, and accretion.

Our beaches, estuaries, kelp beds, and riparian areas are vital to many important species in Puget Sound which depend on the nearshore environment for a part or all of their life cycle. Chum, coho, and chinook salmon all spend time in the estuary to grow before entering the expansive world of the ocean. Forage fish, an important food source for salmon, sea birds, and many species of whales and dolphins, depend on beaches and eelgrass beds to lay their eggs. In fact, nine out of 10 species listed as endangered or threatened within the Puget Sound region spend at least some of their lives in the nearshore. WDFW's Nearshore Program focuses on protecting and restoring the natural processes that create and sustain our nearshore habitats.

What is the nearshore?

The nearshore is a narrow ribbon of land and shallow water that rings Puget Sound. It includes the cliffs or bluffs that neighbor beaches, portions of streams and rivers that are influenced by the tides, and shallow water areas to a depth where sunlight no longer supports marine vegetation (known as the photic zone).

The nearshore ecosystem is an interconnected machine. The bluffs erode, sending material to the shoreline which creates beaches; the tide comes up the beach and carries some of this sand and gravel into the water, depositing it and creating other beaches. This section of shoreline where sand and gravel naturally move to create beaches is called a drift cell.

There are more than 800 drift cells in Puget Sound. Each drift cell needs a source of sediment (e.g. an eroding bluff), a transport zone where sediment is pushed by wave action along the beach, and an area where the sand and gravel are deposited. This constant movement creates a dynamic and ever-changing environment that is vital for many Puget Sound species.

The video below highlights this drift cell process.

Because Puget Sound's nearshore environment is so large, WDFW's Nearshore Program has developed a method to make studying it more manageable by breaking it into process units. Each process unit is made up of a drift cell and it's adjacent upland area. Puget Sound's 16 large river deltas are also broken into their own process units because they do not fit well into the drift cells described above.

To find your nearest drift cell and process unit, explore this nearshore map.

Not all Puget Sound shorelines look the same. Some are rocky, some are sandy. Some are steep bluffs and rocky cliffs, others are broad salt marshes or tide flats. These differences reflect the geology of the coastline and the way in which it has been shaped by waves and tides.

Puget Sound shorelines can be generally divided into four different types: Rocky coasts, bluffs and beaches, smaller embayments, and large river deltas. Within each of these broad categories, there may be a variety of smaller landforms (sometimes called shoreforms). Embayments include a variety of lagoons and estuaries. Beaches include barrier beaches such as spits.

Embayments are protected estuaries and lagoons where there is too little wave action to form beaches. Most are tidally influenced but may include isolated lagoons and coastal wetlands. Embayments are often referred to as pocket estuaries.

Deltas are formed by the deposition of river (fluvial) sediment where large rivers meet marine waters. The result is a broad and low-lying area consisting of tidal marshes and coastal wetlands—many large river deltas have been heavily modified for agricultural and urban uses.