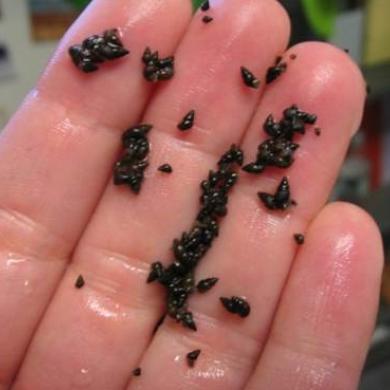 New Zealand mudsnails are classified as prohibited because they pose a risk of harming or threatening the state's environmental, economic, or human resources. Due to rapid self-reproduction, the species can quickly achieve densities of more than 500,000 snails per square meter. These mudsnails feed on the algae and detritus that are important to native aquatic insects, which are critical food source for juvenile native salmon.

New Zealand mudsnails are not an alternative food source to native fish since they have very low nutritional value and most often pass through a fish's digestive track unharmed. After moving into a lake or stream, these mudsnails are nearly impossible to remove without damaging other aspects of the habitat.

New Zealand mudsnails are small (an average of 1/8 inches long) and cone-shaped. Their shells have five to six whorls, fairly uniform in size, and vary in color from light-brown to black.

This species of mudsnail is hearty, surviving in a variety of salinity, water temperature and quality. A movable cover at the opening of its shell (the "operculum") allows the mudsnail to protect itself from short-term exposure to most chemicals. The New Zealand mudsnail also survives out of water for quite some time and has no known predators or parasites in Washington state that can keep populations in check.

A single female snail can rapidly reproduce through cloning, adding 230 snails to the population annually. That initial snail, along with its offspring, can build a population into the billions of snails within a four-year timeframe.

New Zealand mudsnails mostly feed at night on algae, sediment, plant and animal detritus – all of which would otherwise be consumed by native snails and insects.

Not native to the United States, New Zealand mudsnails were initially detected in 1987 on Idaho's Snake River. The species is now found in many locations throughout the West, including in Yellowstone National Park, American River in California and parts of Lake Powell in Arizona. New Zealand mudsnails also have spread east to the Great Lakes and the St. Lawrence River. Although fairly widespread geographically, infestations are generally limited to relatively small areas and prevention of further spread is a primary management priority.

New Zealand mudsnails invasive history in Washington state goes back to 2002 when they were discovered in the Lower Columbia River estuary. Since then, the species has been found in several locations in Washington including Lake Washington, the Chehalis River, and Capitol Lake in Olympia.

The primary statewide management efforts for mudsnails are incorporated into the Department's overall aquatic invasive species (AIS) prevention program actions. These include signage at water bodies and boat launches, field gear decontamination protocol development and trainings, and education/outreach to the public. When an infested site is newly discovered, the Department provides consultation, coordination, and support to local jurisdictions on management options including containment, control, and eradication.

Boaters, kayakers, anglers and anyone who recreates or works in Washington's waters should take measures to help prevent the spread of New Zealand mudsnails. For more details on the prevention methods, visit WDFW's webpage on preventing the spread of aquatic invasive species.