Hard to believe, but trees can actually provide more habitats for wildlife dead than when they are alive. Standing dead and dying trees, called “snags” or “wildlife trees,” are important for wildlife in both natural and landscaped settings, occurring as a result of disease, lightning, fire, animal damage, too much shade, drought, root competition, as well as old age.

Snags enhance local natural areas by attracting wildlife species that may not otherwise be found there. All trees of all sizes are potential snags. Unfortunately, many wildlife trees are cut down without much thought to their wildlife value or of the potential management options that can safely prolong the existence of the tree.

Learn how to identify cavities in snags and conserve habitat for wildlife in this video. You’ll be able to use this information the next time you’re gathering firewood or setting up a hunting camp to help conserve important habitat.

Wildlife that use snags

More than 100 species of birds, mammals, reptiles, and amphibians need snags for nesting, roosting, shelter, denning, and feeding; nearly 45 species alone forage for food in them. Hollow snags and large knotholes are used by many species of mammals such as squirrels, marten, porcupine, and raccoons.

In winter when snow covers the ground, northern flickers and other common backyard wildlife depend heavily on insects and other foods found in snags. Brown creepers, bats, and other small animals will roost behind loose bark and bark slits for winter warmth and shelter. Hollow snags are very valuable in winter as they are used by many species such as squirrels, raccoons, owls, and bear for denning and roosting. This high use of snags by a myriad of species underscores the importance of preserving snags and including them in your landscape.

Woodpeckers such as the northern flicker create new cavities in snags and are thus referred to as “primary cavity nesters.” They have thick-walled skulls supported by powerful neck muscles, and a beveled, chisel-like bill. A woodpecker’s strong, grasping feet with sharp, curved nails form a triangular base for support in the vertical position along with specially adapted tail feathers. The woodpecker’s barb-tipped tongue and sticky saliva help it get insects from deep crevices.

Unlike other cavity-nesting birds, woodpeckers rarely use nest boxes because they are biologically conditioned to dig their own cavities: the physical motions of cavity excavation stimulate reproduction. Woodpeckers excavate several holes each year and rarely nest in the same one in consecutive years, thus creating many cavities for secondary cavity nesters such as bluebirds, tree and violet-green swallows, chickadees, nuthatches, house wrens, wood ducks, squirrels, and owls who cannot excavate cavities themselves. Secondary cavity nesting wildlife are highly dependent upon the availability of these abandoned nest cavities.

Trees that make the best snags

Large snags more than 12 inches in diameter and 15 feet tall offer ideal hunting perches for hawks, eagles, and owls. They function as resting perches for swallows, band-tailed pigeons, mourning doves and other birds; food storage for mice, squirrels, woodpeckers, and jays; and song perches for tanagers and flycatchers. In addition to nesting, woodpeckers use large dead tree trunks as a way to announce their presence during courtship, hammering their bills against the tree’s resonating surface.

Small snags may be used as song posts by bluebirds, hummingbirds, and other songbirds to attract mates and proclaim nesting territories. Black-capped chickadees nest in small tree snags as little as six feet tall and four inches in diameter.

Snags of both deciduous trees (those that shed leaves in winter) and conifer trees (evergreens) are used by wildlife. The most favored snag species east of the Cascades are ponderosa pine, western larch, quaking aspen, and paper birch; west of the cascades Douglas fir and western red cedar snags are highly favored and big-leaf maple and cottonwood are also used. Softwood trees such as fir tend to make better food foraging trees, while hardwood trees are sometimes better for nesting cavities. Nevertheless, just about any species of snag tree will be used by wildlife.

Small trees rot rapidly, creating wildlife habitat. Black-capped chickadees nest in snags as small as six feet tall and four inches in diameter. The large conifers such as cedar, fir, larch, and pine, tend to rot more slowly than do deciduous trees such as alder, birch, and cherry. However, large deciduous trees such as cottonwoods, big-leaf maples, and oaks can last many years as snags. Moreover, while alive, they tend to develop cavities in their bulky and dead branches and trunks.

The best snags for cavity-nesters are those with hard sapwood (between bark) and decayed heartwood (inner core) making them hard on the outside and soft in the middle. The hard sapwood provides protection from predators and insulation against weather, while the softened heartwood allows easy excavation deep into the snag. Many birds avoid very soft snags for nesting because extremely soft wood can be wet or crumbly. Strong primary excavators, such as the pileated woodpecker and red-naped sapsucker, occasionally select living trees with decayed heartwood, such as quacking aspen, because they can penetrate through the sound layer of sapwood and excavate the nest cavity in the soft heartwood. Generally, the sapwood remains fairly intact and forms a shell surrounding the decaying heartwood. The excavated interior may remain useable for many years by many species.

Snags in your landscape 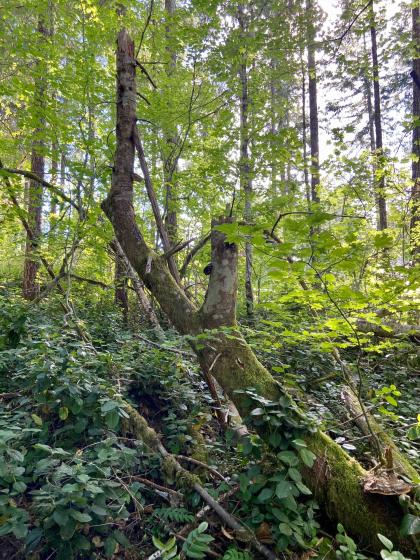 Try to incorporate one or more snags into your landscape by keeping old and damaged trees when possible. When clearing, retain trees and tall shrubs near the planned snag to protect it from wind and provide a healthier environment for wildlife. In urban areas, tall snags are best located away from high activity areas, where they won’t pose hazard if they fall. Trees that lean away or are downhill from structures and other areas of human activity present little or no risk.

Because individual snags may have only one wildlife habitat feature (perch, cavity, etc.), retaining and promoting small clumps of snags throughout a larger property is more likely to provide all of these features. Small dead ornamental and fruit trees can be left in the landscape where they are not a safety hazard because they will be used as perches for preening, resting, foraging, and singing.

Any snag you provide for wildlife will likely be used, but in general bigger is better. Ideally, snags should be greater than 15 inches in diameter and taller than 10 feet. The large diameter provides opportunities for cavity excavators up to the size of pileated woodpeckers to use the snag. Snags taller than 10 feet provide cavity users great safety from nest predators such as black bears and weasels.

You can even create a snag from a live tree! Remember, a tree can provide habitat even when just part of it dies. For instance, if a large conifer has a fork in it, you can girdle one of the forks creating an excellent perch, though girdling generally leads to a hardened snag or branch making is less suitable for cavity nesters. If the trunk of this tree is large enough in diameter, a future cavity may develop as the perch limb dies. If a live tree greater than 12 inches in diameter needs to be taken down on your property, consider making a snag by removing the top of the tree, while leaving a stump that is at least 10 feet tall.

Always hire an expert tree service to remove branches and tops of large trees. Make sure that whoever does the work is licensed, bonded, and insured, and understands your intention to make a wildlife tree. Many certified arborists with the International Society of Arboriculture specialize in wildlife tree creation and maintenance.

It is possible to install a small snag on your property obtained from somewhere else, such as those salvaged from a construction or logging site. Be sure to get permission from the landowner. Snag relocation is difficult, dangerous, and usually requires professional help and special equipment.

A dead tree is generally much heavier and more fragile than it looks, weighing several hundred or even thousands of pounds. Remember, if you double the diameter of a cylinder, you quadruple the weight. An old snag, too rotten to support its own weight, is best used as a log. Relocate the snag to a place where it will remain upright and secure. If you are moving it within your property, try to install it as close as possible to its original location, minimizing disturbance to wildlife that have been using it. Locate the snag in a wind-protected area near live trees and shrubs.

If not managed properly, snags can pose a risk to people and structures. If a dead or dying tree threatens something that can be moved, such as a swing set or patio furniture, consider moving those items before cutting the tree down. An alternative to eliminating the entire tree is to remove only the dangerous section(s). Consulting with a certified arborist with experience in wildlife snags is recommended. These professionals can determine what part of a tree is a hazard and provide management options to reduce or eliminate any risk. Remaining parts can be removed over time. Often, once the unsafe limbs or portions of the trunk have been removed, the tree is safe.

When a tree must be cut down, maximize its habitat value by placing as much of the debris as possible near the area where the tree was removed. In hot, dry areas, move the material into the shade of nearby trees or large shrubs. Bringing branches in contact with the ground will cause them to rot faster. Place a nest box on your site as replacement for cavities lost through tree or limb removal.