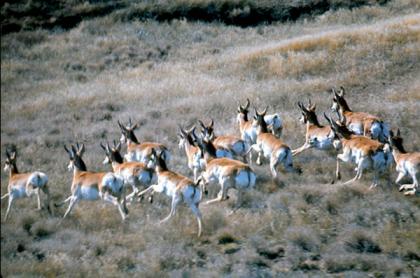 The pronghorn antelope is the rarest and least known hoofed mammal classified as a game species in the state of Washington. Although often simply called antelope, pronghorns are not true antelope at all. Most authorities consider them the sole modern member of the Antilocapridae family, while all other horned ungulates (mammals with hooves) in North America belong to the Bovidae family.

Pronghorns are rather small ungulates, measuring from 1 to 1.5 meters (3 to 5 feet) from head to tail, and from 0.8 to 1.0 meters (2.5 to 3 feet) at shoulder height. Adults weigh from 35 to 70 kilograms (77 to 154 pounds). As their name implies, males (and occasionally females) carry black horns that consist of a sheath made of keratin overlaid atop a permanent, boney core. Female horns, if present, are little more than bumps, but those of males have a distinctive shape, with a sharp tip and a forward prong. The horn sheaths of males are shed after the rut and regrown each year. Both males and females feature a cinnamon-brown coat on their backs, with white underside fur and three or four white bands under the neck.

Supremely adopted to open, relatively flat grasslands and shrub lands, pronghorns are great travelers, and some populations migrate large distances annually. They are generally considered the fastest land mammals in North America, sometimes referred to as speed-goats. Pronghorns typically live in groups (larger in winter than summer), although breeding males will separate themselves into small territories in autumn and attempt to entice adult females. Pronghorns do not do well in deep snows, and populations can decline severely during harsh winters, particularly if herds are unable to migrate to areas with less snow. Although their anatomy enables them to sprint with ease, they are poor jumpers and do not easily jump over fences in the same way as deer and elk.

Washington represents the northwestern extent of historical pronghorn range. Pronghorns declined significantly throughout their range in the 19th century, at which time they were extirpated from Washington. This may be the reason some books and reference materials continue to show their native range as excluding Washington. While pronghorns were probably never numerous in the state, their populations ebbed and flowed with large scale climate changes and migrations. Historical records are clear that pronghorns did at least occasionally occupy much of the central portion of the state between the Cascades and the forested northeast and Blue Mountains.

The Washington State Game Department (the predecessor agency to the current WDFW) attempted to establish pronghorn populations by reintroduction on three separate occasions, none of which could be termed successful. In the late 1930s, pronghorns from Nevada were introduced to what is now the Yakima Training Center after first being kept in captivity. In 1950, a separate attempt was made to introduce pronghorns in Adams County, near Ritzville. In 1968, a small number of pronghorns were released in Kittitas and Grant counties. Although many animals survived, reproduced, and moved widely, no animals were known to have survived past the mid-1980s.

With their small mouth and specialist teeth, pronghorns are selective feeders. Diets vary depending on geography and availability, so it is difficult to characterize a universally preferred forage. In general, however, pronghorns have been found to prefer forbs over grasses and shrubs over herbaceous material. Pronghorns are known to eat cactus, and many populations subsist largely on sagebrush. However, when available, pronghorns will enter fields of alfalfa, winter wheat, and other cereal crops, causing local damage. At least one study in Kansas, however, suggested that even when present in fields, pronghorns may not forage on winter wheat. Damage is more likely to alfalfa and hayfields. Because of their preference for open spaces where they can detect and escape from predators, they are unlikely to enter orchards, vineyards, or areas with tall crops (e.g., corn, sunflowers). Similarly, they generally avoid both riparian zones and forested areas.

All wild animals must cope with naturally occurring pathogens and parasites. Die-offs of pronghorn attributed to the blue-tongue virus have occurred. They are also susceptible to the closely-related epizootic hemorrhagic disease virus. Such disease outbreaks were likely related to exposure of pronghorns to livestock (transmission has apparently not occurred from wild pronghorns to livestock). Individual pronghorns have been documented as succumbing to pneumonia, rabies, and caseous lymphadenitis. Importantly, because pronghorns often live near domestic livestock, they have not been documented as susceptible to (or carriers of) brucellosis, bovine tuberculosis, bovine anaplasmosis, or leptospirosis.

Because of their small size, their ‘dainty’ dietary habitats, and their frequent movements, pronghorns are rarely considered a major agricultural pest. However, in specific circumstances and in local areas, pronghorns can cause damage, particularly to alfalfa fields and stockpiled hay. According to Schemnitz (1994), a number of preventative measures can be taken to reduce pronghorn damage to agricultural crops. These include: