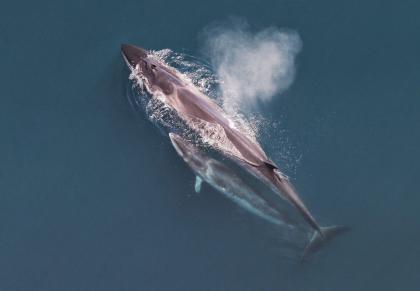 The stock of sei whale that occurs off the Washington coast is part of the Eastern North Pacific Stock, which extends from Washington to California. This stock is quite small at about 500 whales, with trend unknown. Although there have been no recent confirmed detections of sei whales in Washington, the species likely remains a rare visitor to the state’s outermost waters. Threats to the stock are poorly understood.

The sei whale is the third largest baleen whale. Their length ranges from 40 to 60 feet and weight can be up to 50 tons. Females are larger than males. The dorsal fin curves backward. The sei whale keeps a low profile when surfacing and diving.

This species generally occurs along the edges of continental shelves and in deeper oceans, especially where ocean fronts and eddies exist. Temperate waters may be preferred. Movement patterns are not well known, but the species is highly mobile and many animals between lower latitude wintering grounds and higher latitude feeding grounds in the summer.

Sei whales are flexible in their prey selection and feed on copepods (small crustaceans), krill, squid, and small schooling fishes (anchovies, saury, and mackerel). Foraging methods include both skim feeding at the surface and gulp feeding below the surface.

A single calf is born in winter (from September to March) after a gestation period of 11 to 13 months. The calving interval among females is two to three years. The species reaches sexual maturity at six to 12 years. Life span is 50 to 70 years.

The sei whale typically travels alone or in groups of two to five, but occasionally forms loose gatherings of 30 to 50 animals on productive feeding grounds.

This species is the fastest swimming whale.

Subtropical, temperate, and subpolar waters are occupied worldwide by sei whales, although the overall distribution is not well understood. The current global population is estimated at 80,000 animals. Most individuals are migratory between higher latitudes in the summer and lower latitudes in the winter.

Sei whales along the west coast of North America, including Washington, are part of the Eastern North Pacific stock, which currently numbers about 500 whales. This stock extends west to 180 degrees longitude. The locations of this stock’s summering and wintering grounds have not been identified. Animals are rarely recorded off the west coast of the United States, with only nine confirmed sightings made in California, Oregon, and Washington waters during extensive ship and aerial surveys from 1991 to 2008.

An estimate of abundance for California, Oregon, and Washington waters out to 300 nautical miles was 126 whales from 2005 to 2008. Although there have been no recent confirmed detections of sei whales in Washington, the species likely remains a rare visitor to the state’s outermost waters. Population trends and historical stock size are unknown.

Sei whales probably have low physiological sensitivity to changes in ocean temperature and other changing oceanographic conditions because of their large feeding range and exposure to varying ocean conditions. However, their overall sensitivity is expected to be greatest due to potential changes in the availability of their prey (zooplankton, squid, and small schooling fish), which may experience population declines as a result of increases in ocean temperature, increases in ocean acidity, and changes in other oceanographic processes. Limited prey abundance could lead to decreased fecundity, survival, and population sizes, though sei whales may be able to adapt by switching to alternative prey or moving to new feeding areas.