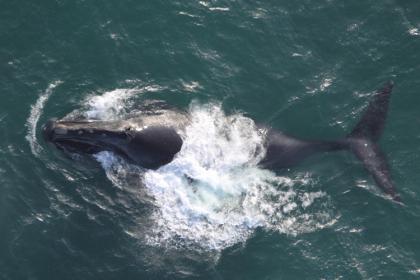 North Pacific right whales are one of the rarest whale species, and the stock that occasionally visits Washington is very small. Threats to the stock are poorly understood, but ship strikes, fisheries entanglements, marine debris, human-generated marine sound, climate change, and small population size may be impeding recovery.

North Pacific right whales are a large, slow-swimming baleen whale with a stocky black body and no dorsal fin. This species may weigh up to 100 tons and be 45 to 64 feet in length.

North Pacific right whales are thought to migrate between higher latitudes during spring and summer and lower latitudes in winter. The species mainly inhabits coastal and continental shelf waters but is sometimes found in deep waters. Occurrence is often strongly linked to areas of high prey abundance.

Diet consists of zooplankton, especially copepods in shelf, shelf edge, and deeper oceanic waters. These whales feed by swimming continuously with their mouths open and filtering prey against the baleen, a behavior known as skimming.

Females give birth to their first calf at 9 to 10 years of age, and calving occurs in coastal waters during winter. Calving may occur every three to five years based on calving rates of similar species. Weaning takes place at about one year of age. This species may live up to 70 years.

North Pacific right whale distribution is restricted to the Pacific Ocean between 20 degrees and 60 degrees north latitude, with most remaining individuals concentrating in the northwestern Pacific and Bering Sea. Migration and winter distribution are poorly understood.

Individuals in the northeastern Pacific, including Washington, belong to the Eastern North Pacific stock. There are only  size of this stock probably numbers about 30 whales remaining in this stock, with no sign of recovery. Population trends for this stock are unknown, but sighting of calves are rare. Stock members are very rare visitors south of Alaska, with just a handful of records off the outer coast of Washington since the early 1900s. At least seven confirmed records off British Columbia, Oregon, California, and Mexico since 1994 suggest that the species still rarely visits Washington. The last visual observation of a North Pacific right whale off Washington was in 1992, although two calls were detected by hydrophone off the Washington coast in 2013.

Limited information is available regarding the sensitivity of North Pacific right whales to climate change, but the small population size of this species increases its vulnerability to this threat. North Pacific right whales will most likely be impacted through changes in abundance and distribution of their primary prey, copepods. Because right whales are limited in the type of prey they can consume and require large aggregations of copepods for optimal feeding, declines in copepod production and distribution, which could be triggered by changing ocean circulation and sea ice extent, increases in ocean acidity, or increases in ocean temperatures, could greatly impact this species. Decreases in copepod availability could lead to reduced reproductive output and decreased calf and adult survival, and could alter migration patterns.