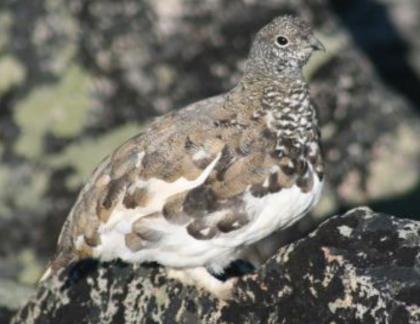 The greatest threat to the long-term survival of white-tailed ptarmigan populations appears to be climate change, which may lead to a gradual loss of alpine habitats as the tree line moves upward.

The white-tailed ptarmigan is about 12 inches long. They have white plumage in winter; males have a red eye comb. In summer, the body is mottled brown or black with white on the tail, belly, and wings.

They are generally resident in the same general habitats throughout the year but some birds may migrate more than six miles.

During winter they may spend time feeding on vegetation in wind-exposed areas, avalanche chutes, and riparian areas with exposed shrubs.

They are monogamous and the breeding pair defends a territory during the breeding and nesting seasons. Females generally produce a clutch of five to seven eggs. Nest and brood success are usually not very high, but these are compensated for with relatively high survival.

White-tailed ptarmigan are distributed in alpine tundra habitats of western North America. In Washington they are found in the Cascades from Mt. Adams north to the U.S.-Canada border.

There has been little work done with white-tailed ptarmigan, but birds are believed to be relatively rare on Mt. Adams, uncommon on Mt. Rainier, and common in areas further north, such as the Pasayten Wilderness. There is an apparent gap of about 31 miles in occupancy between Mt. Rainier and the Alpine Lakes Wilderness to the north.

The Washington population may be about 1,000 individuals.

Physiological sensitivity of white-tailed ptarmigan is likely low-moderate as this species is well-adapted to high altitude climatic variation and harsh conditions, although it has been shown that high winter minimum temperatures can retard population growth rates. The sensitivity of this species will primarily be driven by its dependence on high elevation habitats likely to be affected by or shrink in response to climate change, as well as its dependence on willow for foraging.