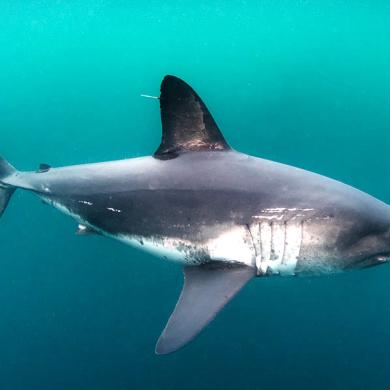 Caught incidentally in the commercial fishery off the outer Washington coast with trawl nets, troll gear, longline, and jig handline gear. Occasionally caught by recreational fishers off the Washington coast, and rarely in the Straits of Juan de Fuca and Georgia.

Salmon sharks, and other related species such as great whites, makos, and threshers, are known for their ability to maintain core body and stomach temperatures well above the ambient water temperature, which is unusual among fish!

Salmon sharks have a short, compressed body with a short, cone-shaped snout and are often mistaken for Great White Sharks (Carcharodon carcharias). Their color ranges from dark bluish, to medium gray, to black on their back, and their white bellies are covered with irregular dark blotches. They have a large first dorsal fin and a small second dorsal fin. The large dorsal fin is situated almost directly over the pectoral fin base. The tail fin has equal-sized lobes. There is a strong keel starting at the small dorsal fin and running laterally back along the body towards the tail, and secondary keels along the lower tail fin base. The eyes are situated forward allowing for binocular vision. Salmon sharks have moderately large, blade-like teeth with lateral cusplets, and long gill slits. While the overall appearance of the salmon shark is similar to the Great White Shark, the latter lacks both the secondary tail keel and lateral tooth cusplets.

The salmon shark ranges from Korea and Japan to the Okhotsk and Bering Seas, and the Gulf of Alaska to central Baja California. They are found in both open ocean and in coastal waters. They have been found from the surface to 668 m (2,192 ft) deep. They have an interesting migration pattern that tends to be segregated sexually until summer or fall when males and females gather in the Gulf of Alaska or Japanese waters to mate. Pupping is thought to occur somewhere off of northern Baja California, which juveniles migrating northward late in their first year of life.