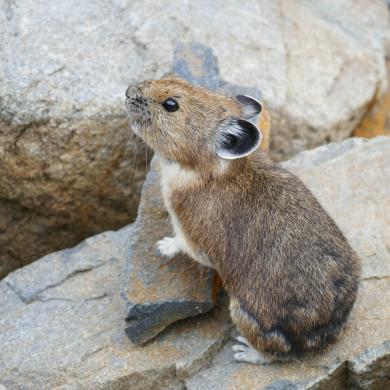 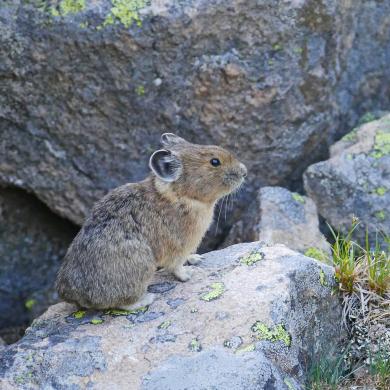 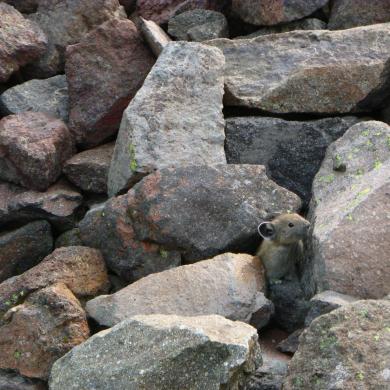 The population size of American pika in Washington is unknown. It is a montane talus habitat specialist that may face threats from climate change.

If you see this species, please share your observation using our Pika Observation Survey App:

The instructions below must all be done on your smartphone.

American pika have small, round bodies that range in length from 6 to 8 inches, and no visible tail. The fur color ranges from shades of gray to tannish-brown. It has large, round ears, and is a relative of rabbits and hares.

American pika habitat is restricted to rocky talus slopes, primarily the talus-meadow interface. They are often found above tree lines up to the limit of vegetation, though they can also survive in rocky areas within forests or near lakes. Pikas do not dig burrows, but they may enlarge dens or nest sites under rock. They are sensitive to temperatures above 78 degrees Fahrenheit and rely on winter snowpack to insulate them from extreme cold conditions.

Pikas reproduce in summer and may have two litters, averaging one to three young per litter. However, usually only young born in the first litter survive to weaning. In most areas, births begin in May and peak in June, but young may be born as early as March in some low elevation areas. Young are dependent on their mother for at least 18 days, and are weaned as early as three to four weeks. Juveniles establish territories and hay piles in the summer of birth, but do not breed until their second summer. The maximum lifespan for the American pika is seven years.

American pikas are found throughout the Cascade Mountains and at higher elevations of the northeast regions of Washington where suitable talus fields in close proximity to food resources are found. Although they are considered a high elevation species, pika populations have been found at low elevations near sea level in the Columbia River Gorge, and at selected locations in Snohomish and Skagit counties as low as 1150 feet. Population sizes and trends in Washington are unknown.

The American pika displays high sensitivity because of its preferred habitat type and condition, low reproductive rate, and limited dispersal ability. The pika requires a moderate amount of snowpack to provide insulation during the winter months; decreasing snowpack because of rising temperatures and shifting precipitation patterns with more rain than snow will negatively impact this species. Pikas have high energetic demands, partly because they do not hibernate; increasing temperatures and extreme heat events may affect the species’ ability to forage during the day. In addition, climate change will likely alter the composition of vegetation in montane habitats; this shift may be to plant species less suited to the pika's nutritional needs. Populations forced to higher elevations in mountainous regions will become increasingly isolated.