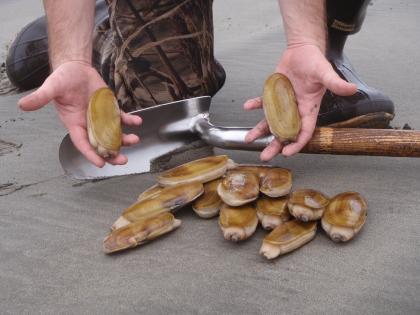 The Pacific razor clam is one of the most sought after shellfish in the state of Washington. It is not unusual to have as many as 1,000 people per mile during a nice spring weekend day. During one recent season, Washington’s recreational razor clam fishery saw more than 280,000 digger trips with diggers harvesting 4 million clams for the season. Recreational digging for razor clams is truly a family sport. It can be enjoyed by children and senior citizens alike. All you need is a clam shovel or specialized tube, a container to put your clams in, and your clam license.

The Pacific razor clam is an exceptionally meaty shellfish, with a narrow, oblong shell. In Washington, these clams can grow to a length of three to six inches. Clams seven inches long have been recorded, but are very rare. The life expectancy for Washington clams is five years. In contrast, razor clams found in Alaska may grow to 11 inches in length and live to be 15 years old, due to colder water temperatures and slower growth rates.

Razor clams can be found on ocean beaches from California to Alaska. Razor clams are found primarily on the intertidal coastal beaches (those that are exposed at low tide) from a +3 foot tide level to a -2 foot tide level. The Washington Department of Fish and Wildlife (WDFW) divides the harvest areas into five major management zones (see map):

Razor clams can be found in a few other Washington locations, including: the Quinault Indian Reservation, numerous small beaches north of Olympic National Park Trail 3 at Kalaloch, and a series of sand spits in the mouth of Willapa Bay that are often referred to as the Willapa Spits and are used for commercial harvest.

A shellfish/seaweed license, combination license, or razor clam license is required for harvesting razor clams. The license must be in the harvester's immediate possession and available for inspection during harvest and transport. Diggers may not harvest any part of another person’s daily limit, except for persons that possess a Designated Harvesters’ Card. Also, for tips on how to legally teach children how to dig, see the WDFW video on our how to dig razor clams page.

For detailed information about all recreational license requirements see the Fishing in Washington Regulation Pamphlet.

Before harvesting, check the beach to determine if a beach is open or if there are any health restrictions by calling the Marine Biotoxin Hotline at 1-800-562-5632 or by visiting the Washington Department of Health’s marine biotoxins webpage.

Diggers must retain the first 15 razor clams harvested regardless of clam size or condition. Diggers may only retain one daily limit of shellfish. Diggers may not harvest any part of another person’s daily limit, except for persons that possess a Designated Harvesters’ Card. Additional shellfish may be possessed in frozen or processed forms. Razor clams may not be returned to the beach.

Razor clams may be taken by hand, hand-operated shovel, or tube with a minimum outside diameter of 4" or (4" x 3" if elliptical). Although each digger must use a separate container to store collected razor clams, diggers may share digging equipment.

It is illegal to drive any vehicle, or lead or ride a horse on the clam beds. Diggers must stay on the upper hard-sand area. Pressure from the weight of the vehicles or digging action of horses' hooves cause clam mortality.

Three areas are set up as razor clam reserves and are restricted from any harvesting. These areas are only 1/4 mile in width. There locations are:

These areas are well-marked with metal poles and signs. For locations, refer to the razor clam beaches map.

Beaches in Washington with razor clam fisheries include:

Long Beach, which extends from the Columbia River to Leadbetter Point. (see Map)

Twin Harbors Beach, which extends from the mouth of Willapa Bay north to the south jetty at the mouth of Grays Harbor. (see Map)

Mocrocks Beach, which extends from the Copalis River to the southern boundary of the Quinault Reservation near the Moclips River, including Iron Springs, Roosevelt Beach, Seabrook, Pacific Beach and Moclips. (see Map)

Kalaloch Beach, which extends from the South Beach Campground to Brown’s Point (just south of Beach Trail 3) in the Olympic National Park.