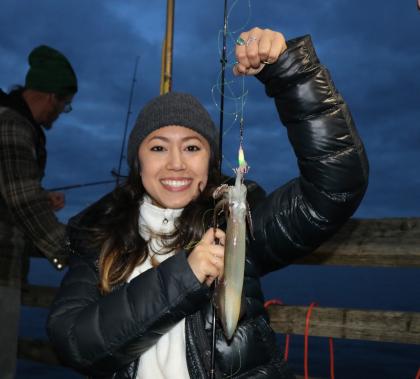 At different times from late May through the following February, adult squid can be found in almost all waters of the Strait of Juan de Fuca and Puget Sound. While reasons for their migration aren’t entirely known, many experts believe the location of squid populations is likely a combination of an ocean-to-South Sound migration of adult squid and resident populations that yield new generations as site conditions become favorable.

More information on jigging for squid is also available in this January 2022 blog post!

Squid feed mainly at night and are attracted to light, which is why public piers are good locations for anglers. Hungry squid lurk in the dark fringes near patches of lighted water and then dart into the bright area in pursuit of food such as young herring and other small fishes.

Because a boat isn’t needed and jigging equipment is reasonable, squid-jigging is one of the most inexpensive ways to catch squid. Anglers should take a camping lantern or large flashlight for unlit locations.

Anglers will need a valid shellfish/seaweed license, available online at the WDFW licensing website or through the many license dealers across the state.

Almost any style of rod and reel will work. Think "light and long" because it's best to have something that is sensitive and telegraphs slight changes.

Successful squidders use anything from 6- to 20-pound line but the best chances of success come with the lighter line.

The "hook" part of a squid lure is different. Squid lures vary in length and thickness, and color and pattern, but they all have a distinctive upward slanting "ray" or two sharp prongs.

Since the idea is to attract the attention of the squid that are watching that lighted area in the water, almost all lures are either luminous or have something embedded in them to reflect light.

Most squid jigs are made out of tinted, semitransparent plastic. Common colors are blue, pink, green, red, orange, amber, and clear. Commercial jigs commonly range in size between two and four inches although some are twice as long and pencil thin.

If using an unweighted lure, anglers should buy some one-ounce lead weights to maneuver the lure down to the desired depth.

Squid generally start feeding just after dark and then often taper off until midnight or later.

A variety of fishing methods can be used to fish for squid. These techniques include use of dip nets and forage fish jigs. However, use of squid jigs is by far the most popular productive method.

Odds of catching a squid are more favorable during high tide on a cloudy or rainy night. These conditions give the nearshore water the depth that squid prefer plus a setting in which the artificial light will be most noticeable.

In other places, multiple lures (up to four) are better. By putting lures of different sizes and colors on the line anglers can test which type is attractive to the squid at that site, that night, at that time.

Anglers should also experiment with the arrangement of the set of lures. Sometimes putting the same lures in different order on the line makes a difference.

A favorite method of setting up with three lures is to space four-inch dropper lines 16 inches apart on the main line. Then add a one-ounce weight to the end of the main line.

Single lure: If using a single lure, cast it out some distance from the dock (or boat or bulkhead) and allow it to sink to a depth where the squid may be lurking. Retrieve it with a series of steady jerks or "jigs."

Multiple lures: If using multiple lures, drop them into the lighted area of the water. Lower them down to the chosen depth (which frequently is just off bottom) then slowly raise them up and down in the water column.

Again knowing how challenging squid can be, no one style of lure is a constant winner. The specific environmental conditions dictate what is going to work or isn't.

Depth: Depth is a critical factor in the pursuit of squid. Having jigs working at different depths often spells "luck" or lack of it for side-by-side anglers.

Keep in mind that squid are congregational beings and stay gathered in schools.

How to land a squid

Squid hole up in the darkness near lighted water areas then lunge into the brighter arena when they see something that looks edible. They don't "bite," however. They deftly wrap their tentacles around their intended prey.

The feel: Squid are those ghost-like "streaks" in the water and it's good to keep their fleetness in mind. Squids propel themselves backward by forcibly expelling water through a tiny nozzle that is part of their anatomy. They also can swim backward and forward, using their fins.

When a slight change in the behavior of your gear is felt, jerk upward to set the hooks immediately. Then keep a steady upward motion when reeling or lifting the catch to the surface. The hooks on squid jigs are barbless and most of the time the squid isn't really hooked, only entwined in the prongs so any slack in the line will lose the catch.

Squid have a defense mechanism -- ink. They shoot dark ink at intruders who come too close. In the water it is an effective defense that creates a cloud behind which the squid makes a quick getaway.

Don't be overly distressed about getting squid ink on your hands and clothes, however. Not surprisingly, the ink is water soluble and washes out if you act quickly before it dries.

A second note of caution is the possibility of bites. It's good to remember that these creatures do have a parrot-like beak. Although squid are not likely to bite at a lure, they can and do bite things like food and perceived enemies who are not alert.

There are two basic ways of cleaning squid depending on whether the recipe calls for cutlets or strips or the whole mantle or rings. The directions below describe these two methods.

This method is the faster of the two. Use if your recipe calls for cutlets or strips.

Step 1: Slip knife inside mantle and slit lengthwise along underside, or belly. Open mantle and scrape away viscera and pen (transparent backbone). 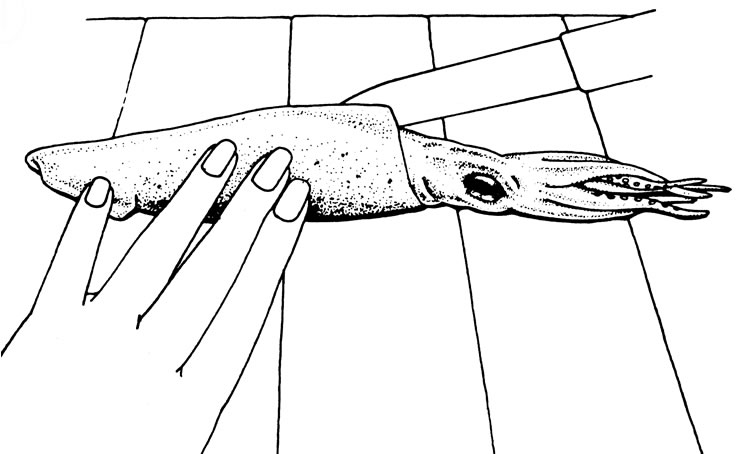 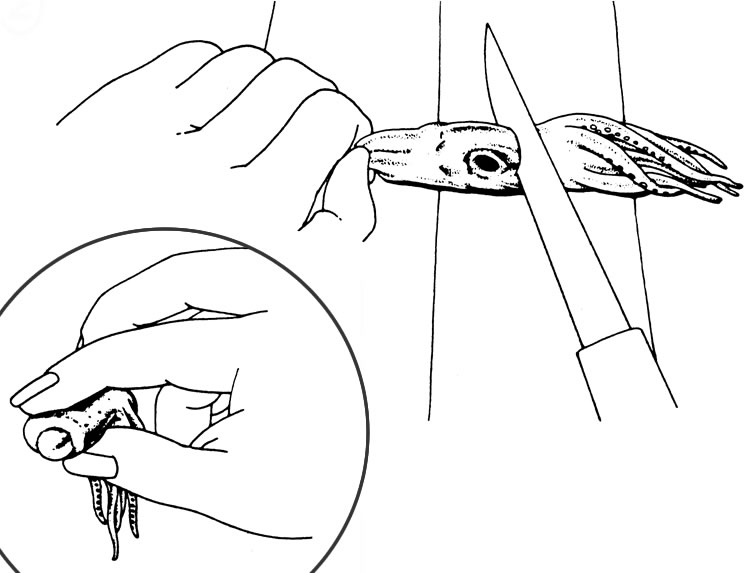 Step 3: Make cut in mantle about a quarter-inch from tail end. Holding membrane near cut, pull mantle away from membrane. Discard membrane. Rinse mantle with cold water; pat dry with paper towels. Use mantle whole or cut into strips widthwise. Use tentacles in recipe, or fry and serve as an appetizer. 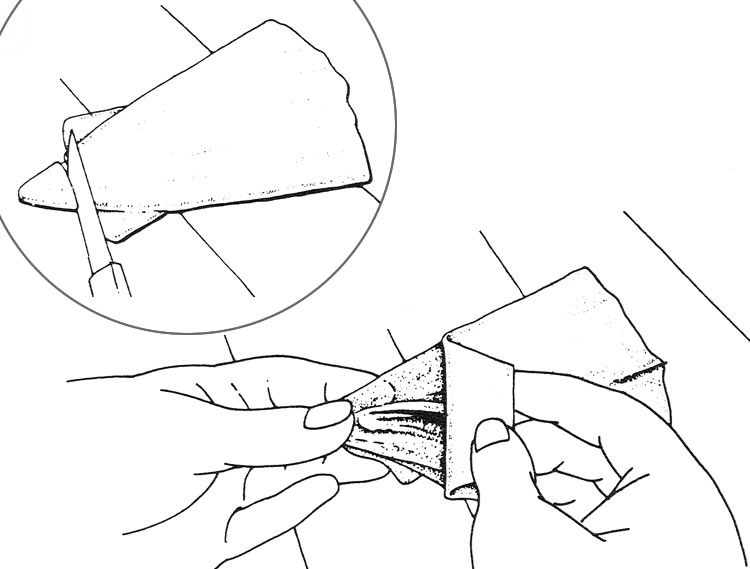 Use this method if your recipe calls for whole mantles or rings.

Step 1: Holding mantle in one hand, pinch pen (transparent backbone) with index finger and thumb of opposite hand, separating pen from mantle. 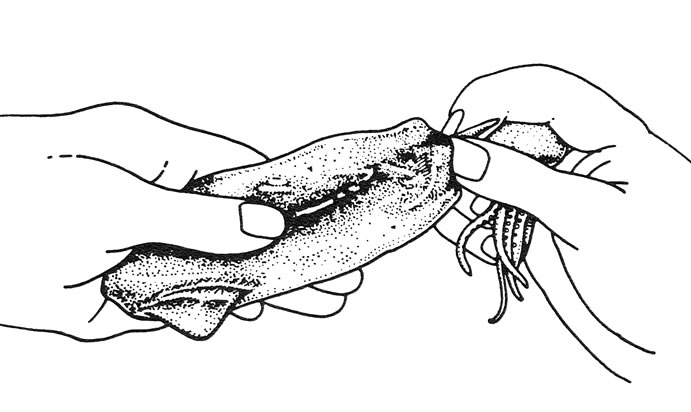 Step 2: Gently pull pen out of mantle, easing viscera out along with pen. Cut away tentacles as in Method A, Step 2. 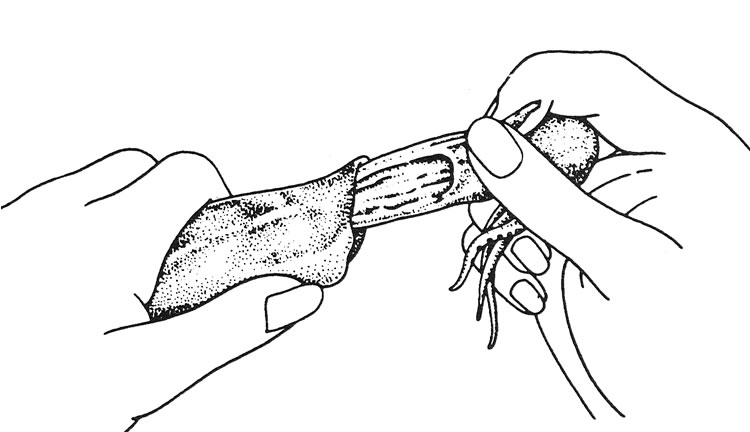 Step 3: Scrape membrane to loosen from mantle. Peel away all membrane and discard. Rinse mantle thoroughly with cold water to remove any remaining viscera. Pat dry with paper towels.

Step 4: Use mantle whole or cut into rings. Use tentacles in recipe, or fry and serve as an appetizer. 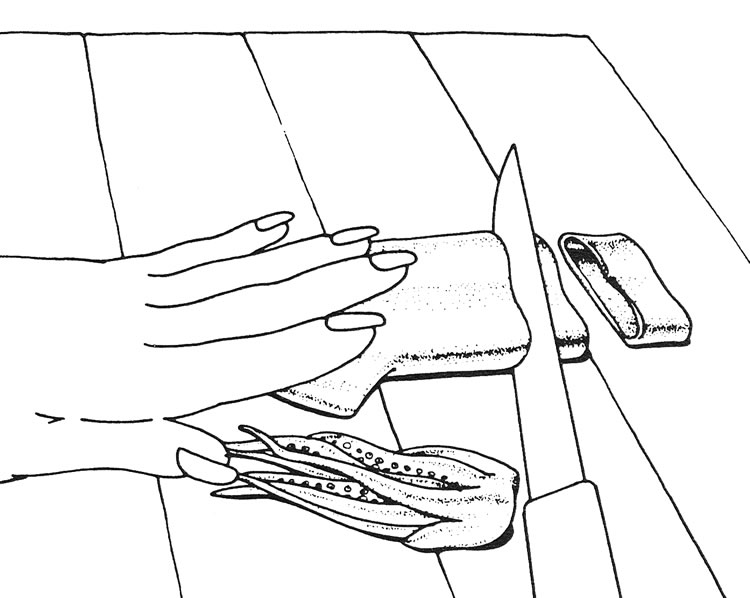 Squid, or calamari, is lower in fat and calories than many other protein sources and is beautifully versatile. It can be used for appetizers, soups, salads or main dishes.

Squid can be sauteed, simmered, stir-fried or baked, and pickled. It can be used in small pieces, in strips, in rings, as a tube with stuffing or in flat filets. Squid also blends itself into many flavor personalities. There are Scandinavian, Asian, Mexican, French, Russian, Spanish, Italian and, of course, American squid variations.

Hints for the chef

Squid belong to the same group of animals as clams, scallops, oysters and abalone.

The flesh is firm, contains very little natural juice and is delicate.

The same goes for marinades. Timing is important. Lacking its own juices, squid quickly absorbs marinades and their flavorings. Thirty minutes is probably the maximum soaking time.

For those who haven't cooked squid before, this favorite recipe for pan-fried squid is an easy way to start.

Dredge squid rings in flour, dip in milk (or egg mixture), roll in crumb mixture. Allow to rest a few minutes to set crumbs. Fry quickly in oil until golden (about one minute on medium heat).

The whole mantles can be used as alternates for tube-shaped pastas, such as manicotti. Here is one such Italian-style recipe.

Combine ricotta, 3/4 cup mozzarella, parsley, oregano, basil, parmesan and almonds and mix well. Stir in bread crumbs and mushrooms. Stuff squid mantles until plump but not packed. Close opening and secure with toothpick. Pour small amount of marinara sauce into 11x17 glass or ceramic baking dish. Arrange squid in single layer in dish. Top with marinara sauce and bake uncovered at 350 F for 20 minutes. Top with remaining 1/3 cup mozzarella and bake an additional 10 minutes or until squid is tender and filling is bubbly. Serves four.

Here is calamari in Greek attire.

Cook squid in boiling, salted water about one hour or until tender. Drain. Cut into pieces. Sauté onion and garlic in hot oil until brown. Add tomatoes, parsley, seasonings, and squid. Cook until tender. Serve hot over rice. Serves 6.