Commercial shrimp fishing off Washington dates from the late 1950s. Although other species of shrimp are present, only pink shrimp (Pandalus jordani) has been abundant enough to support a large, long-term commercial fishery.

Beginning off Grays Harbor in 1956, the inception of mechanical peelers and growing consumer demand for “cocktail” shrimp spurred fishery development. Catches in 1958 exceeded 6.5 million pounds but declined to less than 2 million pounds annually through the 1960s. In subsequent decades, landings fluctuated in response to shrimp abundance and market forces.

Washington coastal shrimp fishing activity is split between two ports: Westport and Ilwaco, with processors located at each.

Pink shrimp are caught by trawl gear; the majority of active vessels in the Washington fleet are double-rigged with semi-pelagic, fine-meshed shrimp nets.

Fishing occurs during daylight hours reflecting the behavior of ocean pink shrimp which exhibit a vertical diurnal migration, moving to the bottom during daylight hours and ascending to feed at night. The typical commercial trip ranges from 3 to 6 days including transit to and from the fishing grounds. Shorter trips can occur when fishing is especially productive.

Recent pink shrimp abundance off the coast of Washington has not been specifically determined, but there are strong indications it is stable. The well-documented pink shrimp fishery in the Oregon waters adjacent to Washington does provide some insight into the strength of Washington’s stock. As much as one-third of the shrimp landed into Oregon ports come from waters off Washington State and these landings are included in Oregon’s extensive sampling and logbook evaluation program. By many measures, the Washington and northern Oregon stocks are considered contiguous.

We know that studies in Oregon of trawl fishing’s effects on the overall stocks of pink shrimp show that the environment is the driver of juvenile shrimp recruitment. There is little evidence that harvest reduces recruitment. Ocean shrimp stocks remain resilient to both naturally caused variations in distribution and fishery impacts according to spawning stock and recruitment indices recently updated by Oregon fishery managers. This is proven out by simply reviewing the total ocean shrimp landings, which in 2014 exceeded the previous record high by 100 percent with 30.6 million pounds, recorded. The previous high landing was in 1993 with 15.5 million pounds and the 25-year average is 8.6 million pounds landed annually.

In 1994, the Washington limited entry (LE) license program established 143 licenses. As of 2014, the number of LE licenses stood at 83. Licenses must be renewed annually, but do not need to be fished actively to remain valid; the decline is attributed to LE license owners electing not to renew.

A commercial fisher is legally required to possess two documents to deliver ocean pink shrimp into a Washington state port. 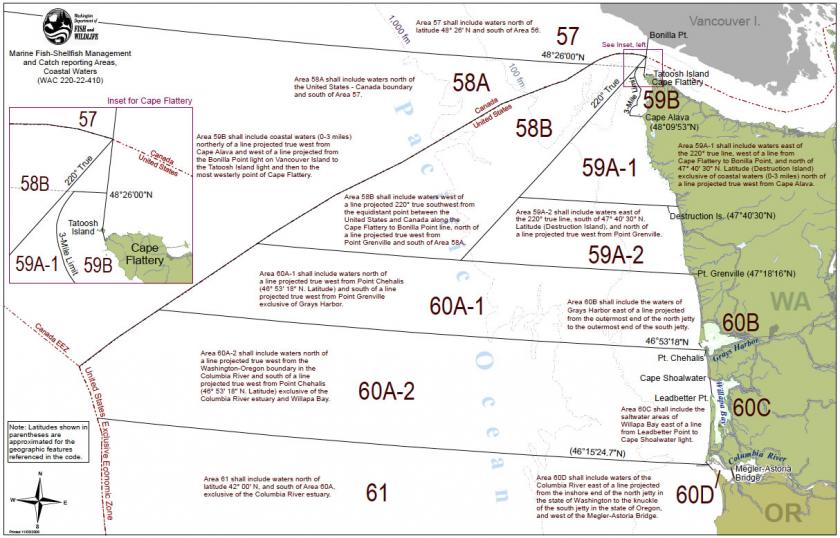 Notices and letters to industry

1. Fill out the top of each page used completely. Start a new page when you begin a new trip.

2. For each line, completely fill out information about each tow even if there was no catch.