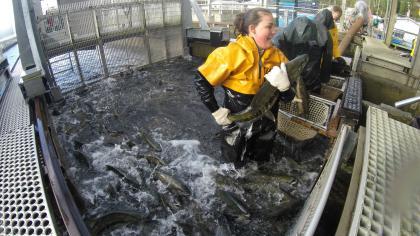 For more than a century, Washington Department of Fish and Wildlife hatcheries have produced fish for harvest. Today, hatcheries provide the foundation for the state's popular recreational fisheries and the many jobs that depend on them. Learn more about WDFW's hatchery facilities and how they help the department manage fish across the state.

WDFW operates dozens of hatcheries around the state, producing millions of fish every year.

WDFW visibly marks hatchery-raised salmon so they can be readily distinguished from wild fish in Northwest waters.

Hatchery production, HGMPs, and the ESA

Learn about how hatchery programs operate in regions with Endangered Species Act-listed populations.

The department is conducting a review of the Hatchery and Fishery Reform Policy, adopted by the Washington Fish and Wildlife Commission in 2009.