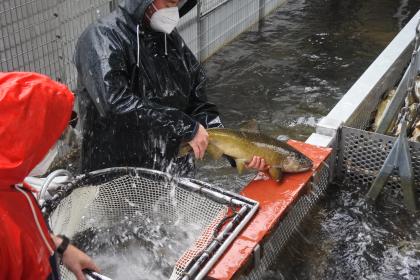 The area known today as Tumwater Falls has seen human activity for as many as 8,000 years, in part due to its easy proximity to fish and shellfish harvest. The Tumwater Falls Hatchery has been part of that history since the late 1940s, when what was then the Washington Department of Fisheries first planted Chinook salmon fingerlings in the Deschutes River near Olympia.

By 1952, the Department of Fisheries had constructed a concrete fish ladder at the site, meant to help returning fish bypass the impasse represented by the falls, with an upper section added later to provide free access to the Deschutes River. In 1961, two concrete holding pens were constructed to help facilitate the collection and spawning of returning salmon. Located on the west bank of the Deschutes, the main structure at the hatchery was the 100-foot by 50-foot collection area, which was divided into two holding pens. Returning salmon made their way up the fish ladder, then gathered in the collection pens to be sorted for spawning and egg collection at a spawning shed located at the end of the collection area. The eggs collected at the hatchery are taken to other hatchery facilities to be raised, then returned to acclimate to the river shortly before release.

A building on site also houses equipment and staff who work at the hatchery year-round, caring for fish when they're present, and maintaining the facilities during the months between runs.

Though nearly all of the hatchery facility sits outside of the Tumwater Historic District, the hatchery and the iconic annual salmon runs that return there every year remain an important feature of the District and Brewery Park at Tumwater Falls. The 1977 National Register Nomination for the Tumwater Historic District notes that although the salmon run “is not a historic feature of the area, it has become over the past 25 years intimately associated with the Deschutes River and Tumwater Falls.”

A facility upgrade completed in 2020 included new holding ponds, modifications to the existing fish ladder, and a viewing area for the public.