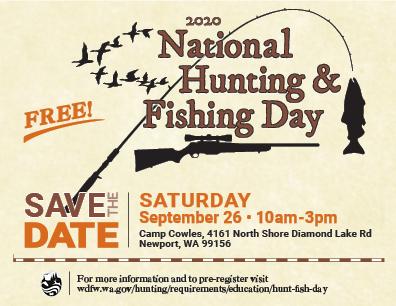 The Washington Department of Fish and Wildlife's (WDFW) National Hunting and Fishing Day celebration is a great, family-oriented way to introduce youth to target shooting, hunting and fishing. It's also an opportunity to recognize that hunters and anglers continue to be among the most active supporters of wildlife management and conservation.

Youth 17 years and younger who attend the event with an accompanying adult can shoot WDFW firearms, archery equipment and air rifles for free. Agency staff and WDFW hunter education instructors will be on hand to teach shooting safety and provide instruction and guidance.

About National Hunting and Fishing Day 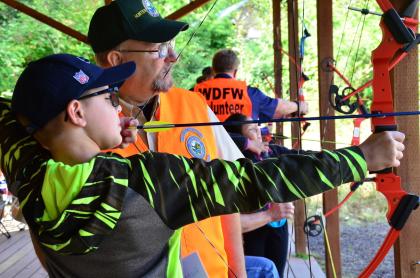 In the 1960s, hunters and anglers embraced the era's heightened environmental awareness but were discouraged that many people didn't understand the role that sportsmen and women played -- and continue to play -- in the conservation movement.

With urging from the National Shooting Sports Foundation, Congress unanimously authorized National Hunting and Fishing Day on the fourth Saturday of every September. On May 2, 1972, President Richard M. Nixon signed the first proclamation of the annual celebration.

Today, National Hunting and Fishing Day continues as an opportunity to celebrate outdoor sports and conservation -- and as a day to share the pride in conservation successes led by hunters and anglers across the nation.

In March 2016, the U.S. Fish and Wildlife Service distributed $1.1 billion in revenues, collected from fishing- and hunting-related excise taxes to support outdoor recreation and conservation efforts in all 50 states through the Pittman-Robertson Wildlife Restoration and Dingell-Johnson Sport Fish Restoration acts. The state of Washington received $20 million of this funding.

This is not a new phenomenon; billions of dollars have been contributed to state agencies since the 1930s by American hunters and anglers in support of conservation and wildlife management efforts.

Facts about hunting and fishing:

Funding from hunters has helped restore wildlife populations and habitat:

Hunters and anglers have been among the nation's largest contributors to conservation, paying for programs that benefit America's wildlife and all who enjoy the outdoors