An overview of falconry in Washington State 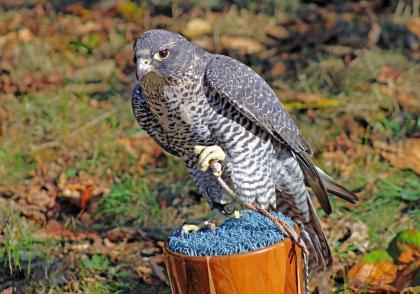 A person who hunts with a raptor is called a falconer and the sport is called falconry. Falconry is the art of training raptors (birds of prey - falcons, eagles, hawks, and owls) to hunt in cooperation with a human and is the sport of actively pursuing wild quarry with those birds. Raptors have always held a special place in the lives of humans and training a bird of prey for falconry is to allow it to accept a falconer as a partner in the hunt.

Falconry is not for the faint of heart or casual recreationist. It takes time and dedication. Falconry is a demonstration of the predator/prey relationship where people witness and directly participate in nature.

The Washington Department of Fish and Wildlife issues falconry permits, regulates the sport, and remains in contact with the falconry community. No one under any circumstances may keep a raptor as a pet. Only licensed falconers may have birds of prey, and these birds must be flown freely and hunt regularly.

State and federal regulations, expertise and dedication of falconers, and self-policing by the falconry community keep the birds in high-quality care. Falconers know the critical importance of caring for their birds and will assist those whom they feel need help. The raptors are athletes and falconers strive to keep their birds in top condition.

When falconers fly their raptors, they are free-flying and may leave if they choose. Falconers sometimes attach tiny radio transmitters on their birds to monitor their location and safety in the field. Some birds do leave and some become lost, but the vast majority voluntarily return to their falconer partner.

Additionally, when wild birds are captured, they are young and in their first year. In the wild, about 70 percent of first year birds die. Falconers get the fledgling bird safely through its first year, and often release it back to the wild in better condition than when they found it. Environmental impact studies consistently show falconry has no negative impact on wildlife populations.

Long before guns, people used birds of prey to obtain fresh meat. The first time people used raptors for hunting was as early as 2000 B.C. and probably in Asia. In the early 1900s, the sport of falconry reached the United States.

Falconry is now regulated in the same manner as other forms of hunting. Laws and regulations govern the numbers and species of birds taken from the wild, how many a falconer may possess, when and how they may be taken, and who may possess them.

Today's falconers are not only sports men and women; they are committed conservationists. Falconers played a large role in the peregrine falcon's comeback from near extinction, and every raptor species used in falconry has stable and increasing populations.

Many falconers are involved in raptor breeding and rehabilitation to further the welfare of raptors. USFWS permits are required to breed raptors. Many falconers dedicate their time to educating children and adults, such as scouts and service clubs, about raptors and the need to protect them.

Federal and state wildlife agencies are authorized to regulate falconry under the following statutory authorities:

Chapter 220-420 of the Washington Administrative Code (WAC) State Falconry Regulations supersedes any statement in this document and on this webpage.