How to Prepare for Hunting Season

Most serious (and successful) hunters know that hunting season doesn’t begin on opening day; it starts in the weeks and months prior to the season. That’s the time to do the homework and the legwork that’s likely to put you in the right place at the right time once opening day actually arrives. While preparing for the fall hunts isn’t a half-day or even a one-weekend project, there’s still time to get ready. Here are some suggestions:

Be sure you know all the details about the upcoming season dates, license and permit requirements, fees, bag limits and other rules. Many of these details change year to year, so never assume that last year’s regulations are going to apply to your favorite hunting spots this season. Overlooking even a "little" detail or rule change can ruin your hunt. Pick up a copy of Washington’s Big Game Hunting Seasons & Regulations pamphlet and Washington State Migratory Waterfowl & Upland Game Seasons pamphlet and look them over carefully, especially the sections that concern the species and areas you plan to hunt.

Anyone born after January 1, 1972 must complete and pass an approved Hunter Education course before he or she may buy a license or hunt in the State of Washington. Both on-line and traditional classes are available, but there’s a hands-on instruction/evaluation course and test component to both, and those fill up fast, especially in summer and early fall. There is also a one-year, once-in-a-lifetime Hunter Education deferral option. Those hunting under a deferral must be accompanied by an experienced hunter who has held a Washington hunting license for the previous three years.  For details on Hunter Education classes in Washington, see the Hunter Education page. 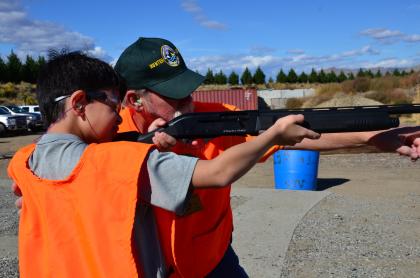 Depending on what game birds or animals you plan to hunt, where, how and when you’re planning to hunt them, you’ll need one or more license documents to do it legally. A big game license or small game license is the first step in most (but not all) cases. Deer, elk and other big-game hunters also need species tags for the animals they’re hunting, while waterfowl hunters must have both a federal migratory bird stamp and state validation to hunt ducks and geese (plus authorization and harvest report cards for some species). Most upland bird hunters need only a small-game license to pursue their sport, the exception being pheasant hunters in western Washington, who need a western Washington pheasant license rather than a small-game license. The big-game pamphlet and migratory waterfowl/upland game pamphlet are the best sources of information on license details. Purchases can be made online or at a local license dealer.

Spend some time with maps

A good map can provide a wealth of hunting information, whether you plan to hunt big game, waterfowl or upland game. Besides just showing the way to a starting point, a good map, used the right way, will even lead you to the places where game animals are most likely to be found.  There are plenty of map resources available to get you there. Start with the wide screen, like a Washington State road map to help you locate a few areas of interest, then focus down to the point where you’re studying steep, forested canyons that may hold late-season bull elk or a series of small, shallow ponds more than a mile off the nearest road that looks perfect for jump-shooting a limit of mallards. Good map resources are available both in hard copy and online. Check out WDFW’s online Hunt Planner webmap to review Game Management Units, topography, satellite images showing vegetation and terrain, etc.

Also, explore the Department’s Game Harvest Reports and Game Status and Trend Reports to gauge how hunters have fared in previous years and what biologists have observed for the health of the population.

The best way to know what to expect of any hunting area is to get out and see some country for yourself before the season begins. The more familiar you are with a particular patch of ground, and the animals that live there, the better your chances of hunting success. If you scout a deer-hunting spot so often and so well during the late summer and early fall that you know the daily comings and goings of two or three nice bucks, there’s a good chance you’ll be in the right place at the right time on opening morning.

Get to know landowners

Many of this state’s best hunting opportunities are found on private land, some open to hunters under WDFW’s Feel Free to Hunt, Register to Hunt, Hunting by Written Permission or other agreements. In many cases, though, the best way to gain hunting access to private property is to introduce yourself to the landowner and ask for permission to hunt. Some may answer with a polite "no" and an appropriate response is to still thank them for their time. Some will say "yes," and it could pave the way to good hunting not only this season, but several seasons into the future. Like scouting, getting permission to hunt on private land well ahead of the season is best and can avoid a lot of wasted time during the season.  Ask the landowner if there are special considerations of accessing their land, and follow through.  Make sure gates are returned the way you found them and respect areas landowners may have said are off limits to hunting (e.g., near their livestock or near their residences, etc.)

Some of the most successful hunters around are those who can cover the most ground in a day, whether that ground be flat or on a steep slope. If you’re in good enough physical condition to stay with it from daylight to dark, your odds of hunting success increase. Shaping up before you hunt is especially important for folks whose everyday lives don’t include much physical activity. Start walking, jogging, climbing stairs, visiting the gym or whatever you need to do long before opening day and this hunting season will be a happier, healthier—and more productive—one. If hiking or climbing is included in your workout plans, wear your hunting boots during your exercise session, especially if they’re new boots that need breaking-in. And, if you hunt with family members or friends, try to get them involved in your workout regime, too, so they can keep up with you.

Work with your dog

If you’re a bird hunter and your regular hunting companion is  four-legged, spend the weeks before hunting season getting him or her into top form. Like the rest of us, hunting dogs lose some of their edge (and in some cases all their memory) during the off-season, so put them through their paces before the opener, reinforcing commands, reminding them how much fun it is to find and retrieve birds, and giving them a chance to burn off those pounds they’ve gained if they haven’t been worked since last fall.

Get home on the (shooting) range

Whether you hunt with a modern firearm, muzzleloader, shotgun, bow or all of the above, the more you shoot, the better you’ll shoot when it really counts. Many hunters spend dozens of days at the shooting range each summer in preparing for the season, and all hunters should spend at least a day or two there. Even a few hours of busting clay pigeons with the old semiautomatic or firing a couple dozen rounds from the bench with your favorite deer rifle will help, but more is better.  Take the time to learn the basics of trajectories of your bullets or arrows, and the performance of your cartridge at different distances.  If you hunt an area where you might take a 200 yard rifle shot for deer, practice at 200 yards.  While walking and jogging, identify landmarks along your route and guess the distance and then pace it to see how you do.  Getting calibrated at judging distances is key to successful shot placement.

One of the best ways to blow a perfectly good day of hunting is to leave an important piece of equipment at home or find it in poor- or non-working order when it’s needed. Make a checklist, lay out every piece of equipment on it, look it all over and make sure it works, then put it all together in one place, ready to be packed for the trip. Anyone who has ever reached into a backpack for a sharpening stone that wasn’t there, stared into the shattered face of a broken compass or discovered an active deer mouse nest in a tattered (and smelly) sleeping bag understands the importance of careful equipment organization and maintenance.

Read through the appropriate (and current) hunting regulation pamphlets to confirm season dates and get them on a calendar. If you haven’t already, start pinning down the dates you plan to hunt, especially for trips that are longer than a weekend outing. If you need to schedule leave or vacation time from work, do it sooner, not later.