Sedro Woolley, WA– State and federal biologists have found the first wild fishers to be born in the North Cascades in perhaps half a century. A female fisher, F105, was detected on a trail camera moving four kits on April, 18, 2021, at her den in western Chelan County.

“Seeing her and her kits is a wonderful first indication that the North Cascades Ecosystem can support a reproductive population of fishers, and it’s a great sign for fisher recovery in Washington,” said Washington Department of Fish and Wildlife Biologist Dr. Jeff Lewis. “We have high hopes that we will find additional females in the North Cascades having kits this spring.” 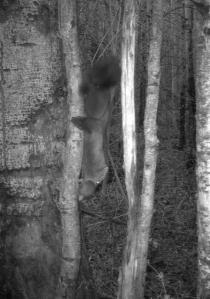 Fishers, a house-cat sized member of the weasel family, were eliminated from Washington by the mid-1900s through over-trapping and habitat loss. They were listed as a state-endangered species in 1998.

Fishers are related to minks, otters, and wolverines, and are native to the forests of Washington, including the Cascade mountain range. This elusive carnivore preys on various small mammals – mountain beavers, squirrels, and snowshoe hares – and it is one of the few predators of porcupines.

The National Park Service (NPS), Washington Department of Fish and Wildlife, Conservation Northwest, and Calgary Zoo released 89 fishers into the North Cascades National Park Service Complex and Mount Baker-Snoqualmie National Forest from 2018–2020, as part of a collaborative effort to restore the species to Washington. Fisher F105 was released on December 13, 2018, west of Darrington, WA.

“Seeing these fishers find their place and thrive brings so much hope to this ecosystem” said NPS Wildlife Biologist Dr. Jason Ransom. “It is a product of the kind of collaborative conservation we need to steward a healthy ecosystem, across boundaries.”

Since reintroduction, fishers have been detected within and around the North Cascades National Park Service Complex, throughout the Mount Baker-Snoqualmie National Forest, in parts of the Okanogan-Wenatchee National Forest, and on private lands as far east as Winthrop, WA. 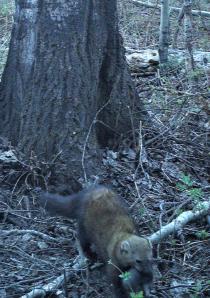 Sixty private landowners have established Candidate Conservation Agreements with Assurances on 3,318,283 acres of their lands in Washington, to help protect fishers wherever they find a place to thrive.

“Seeing one fisher kit born in the wild North Cascades is a wonder; photos showing a group of wild kits is phenomenal,” said Dave Werntz, Science and Conservation Director for Conservation Northwest. “This new family is an auspicious sign that these reintroduced fishers are finding a good home in the North Cascades.”

The reintroduction was made possible by the National Park Service, Washington Department of Fish and Wildlife, Conservation Northwest, Calgary Zoo, and other partners. From 2015 to 2020, these partners also released 81 fishers in the southern Cascades on Gifford Pinchot National Forest and Mount Rainier National Park. More than 250 fishers have been reintroduced to Washington since releases first began in and around Olympic National Park in 2008.

“Bringing a species back to where they had once disappeared is a long and challenging journey, so we’re elated to see fishers from Canada contribute to this important milestone,” said José Luis Postigo, Calgary Zoo Population Ecologist. “As a conservation organization, we’re proud to have contributed our animal care, veterinary, and scientific expertise to this initiative and we celebrate the unwavering support and dedication of all the communities and partners that made this happen.”

Re-establishing viable populations of fishers in the Olympic and Cascade Mountains are important steps to down-listing the species in Washington State. The state recovery plan and implementation plan for fisher reintroduction in the Cascades can be found here.