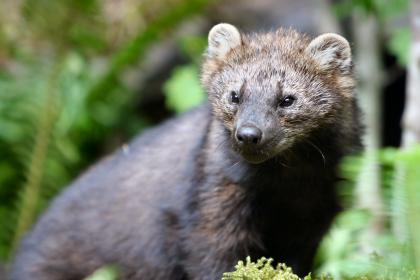 Fishers, a member of the mustelid or weasel family similar in size to a housecat, are native to Washington forest habitats including the Olympic Peninsula and southwest Washington, Cascade Mountains, and northeast Washington.

Historical over-trapping, incidental mortality, and habitat loss and fragmentation caused the extirpation of fishers in Washington by the mid-1900s.

Beginning in the early 2000's, WDFW and partners including the National Park Service and Conservation Northwest began undertaking feasibility studies to determine how to reintroduce fishers to Washington to restore this native species, recover biodiversity, and support natural ecosystems. Fishers eat rodents and other small mammals and are a natural component of Pacific Northwest forest ecosystems.

Fisher population monitoring is ongoing in the Cascades and on the Olympic Peninsula, including distribution and occupancy studies of these areas as an index of fisher population stability and extent.

In Washington, the fisher is listed as a state endangered species and there is no trapping season for this species.

The fisher is a mid-sized carnivore (4.4 to 13 pounds) in the mustelid (weasel) family that use forested habitats. Adults are about 3 to 3.5 feet in length. Males are larger than females.

The fisher is related to the mink, otter, and marten. Fishers have dark brown fur with lighter shading on the head, back of the neck, and back. They have a long furry tail (14 to 15 inches long), short rounded ears, and short legs. They have a low to the ground appearance.

A fisher may be confused with a Pacific marten which is smaller (between 1.5 to 2.5 feet in length), lighter in color, and have a much shorter tail (6.5 to 7.5 inches). These two species can occupy some of the same areas on the Olympic Peninsula and Cascade Mountain Range.

Fishers inhabit coniferous and mixed coniferous-deciduous forests. They tend to avoid areas without substantial tree cover (e.g., clear cuts, grasslands, agricultural fields), areas with significant human activity, and developed areas. Home ranges are commonly characterized by a mosaic of forest stand ages in low to mid-elevation forest landscapes, and these mosaics tend to be dominated by forests with mid-sized to large diameter trees. Fishers are consistently associated with forests that provide moderate to high canopy closure and the presence of large woody structures such as cavity trees, snags, and logs. Large trees, large snags, and large logs with cavities are important habitat features and are commonly used as rest sites and den sites.

Fishers commonly prey upon small and mid-sized mammals, such as snowshoe hares, squirrels, mice, and voles. They also feed on ungulate carrion, fruit, insects, and birds. Fishers are known for their ability to prey upon porcupines.

Females give birth when they are two years of age or older, and litter sizes range from 1 to 4 kits.

Fishers use uncharacteristically large home ranges for an animal of their size (average sizes are more than 19 square miles in northern portions of its range), with male home ranges typically being twice as large as those of females.

Vehicle collisions, and predation by bobcats, coyotes, and cougars are common sources of mortality.  Bobcats are likely the most common predator of fishers in Washington; however, mountain lions, coyotes, lynx, dogs, and wolves may also prey on fishers.

Fishers occur only in the boreal and temperate forests of North America. They once occurred throughout the forested areas of western and northeastern Washington, and may have also occupied southeastern Washington; however, they were eliminated from the state by the mid-1900s, mainly as a result of over-trapping.

In total, 279 fishers from British Columbia and Alberta were reintroduced to forests across the Washington Cascades and Olympic Peninsula from 2008 through 2021 by WDFW, the National Park Service, Conservation Northwest and The Calgary Zoo with support from other agencies, tribes and partners.

The fisher is among the species listed as endangered in Washington. There currently is no trapping season for the fisher in the state.

Beginning in the early 2000's, WDFW and partners including the National Park Service and Conservation Northwest began undertaking feasibility studies to determine how to reintroduce fishers to Washington to restore this native species, recover biodiversity, and support ecosystem resilience. Fishers eat rodents and other small mammals and are a natural component of Pacific Northwest forest ecosystems.

In total, 279 fishers from British Columbia and Alberta were reintroduced to forests across the Washington Cascades and Olympic Peninsula from 2008 through 2021 by WDFW, the National Park Service, Conservation Northwest and The Calgary Zoo with support from other agencies, tribes and partners.

This includes 170 fishers introduced to Washington's North and South Cascade Mountains from British Columbia and Alberta through the Cascades Fisher Reintroduction Project from 2014 through 2020. The Olympic Fisher Reintroduction Project ran from 2008 to 2012, and included an initial 90 fishers reintroduced from British Columbia.

After the overall reintroduction project goals were met in 2020, 19 additional fishers were released at sites around Olympic National Park and Olympic National Forest in November and December of 2021 to boost the numbers and genetic diversity of fishers on the Olympic Peninsula using animals live-trapped in Alberta.

Reintroductions have been successful at reestablishing fisher populations throughout much of the southern portion of their North American range, and because of this success, fisher reintroductions to the Olympic Peninsula and the Cascade Range were a prominent component of the fisher recovery plan for Washington.

Reintroductions have been implemented in Washington because there is sufficient quality and connected mid-elevation forest habitat to support reintroduced populations. Federal, state, tribal, and private lands provide habitat for fishers in Washington and these forests are managed under a variety of approaches that can support fisher populations.

Fisher Candidate Conservation Agreement with Assurances are available for private timberlands and other landowners where fishers may be present. See below for more details.

Surveys from 2013 to 2016 indicated that reintroduced fishers were reproducing and were widely distributed on the Olympic Peninsula. While we don’t currently have specific estimates available, monitoring efforts in the southern and northern portions of the Cascade Range and on the Olympic Peninsula will be continued into the future to evaluate the long-term success of these reintroduction efforts, including distribution and occupancy studies of these areas as an index of fisher population stability and extent.

Overall, project partners feel this collaborative work was a significant step toward recovering the species in Washington.

A CCAA is a voluntary agreement whereby willing landowners agree to help promote the conservation of a species that may later become listed under the federal Endangered Species Act (ESA). In return, landowners receive assurances against additional land-use restrictions should the species covered by the CCAA ever become listed for protection under federal law.

WDFW, in coordination with U.S. Fish and Wildlife Service (USFWS), has provided incentives to landowners and the forest industry to work as partners for fisher recovery through the CCAA program.

In the spring of 2016, the USFWS took these efforts into account when it determined that the state's fisher population did not require protection under the ESA. At the time of this decision, WDFW had enrolled 25 landowners and 1.4 million acres. As of summer 2019, those numbers have increased to 58 landowners and over 3.027 million acres enrolled in the CCAA, helping significantly with fisher reintroduction and recovery efforts. In November 2019, the USFWS published a revised proposed rule for fisher which clarified that Washington was subsequently excluded from the west coast fisher distinct population segment boundaries.

See information on how voluntary agreements protect fishers and forest landowners, plus check out CCAA FAQs.

What is the Fisher Candidate Conservation Agreement with Assurances (CCAA)?

Who is potentially eligible to enroll in the fisher CCAA?

When can a landowner enroll in the fisher CCAA?

Can CCAA enrollment continue if fishers are not federally listed?

What regulatory assurances are provided to landowners enrolled in the fisher CCAA?

What are the terms for landowners who enroll in the fisher CCAA in Washington?

How does this CCAA benefit fishers?

What is the term of the Fisher CCAA?

Can enrolled landowners leave the program before the term expires?

What if I want to sell or transfer property covered under the Fisher CCAA?

How does a landowner enroll in the Fisher CCAA?