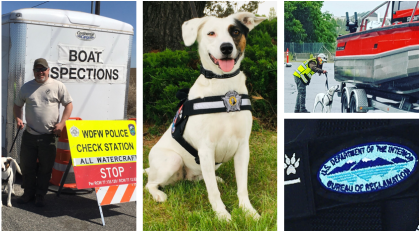 SPOKANE – With Feb. 22-28 declared Invasive Species Awareness Week by Washington Governor Jay Inslee, the Washington Department of Fish and Wildlife (WDFW) is pleased to announce that a new watercraft inspection Station will open near Cle Elum in mid-March.

The station is located just off Exit 80 on Interstate 90 and will focus on inspecting watercraft travelling eastbound into the central Columbia River basin. This new inspection station will enhance WDFW’s efforts to combat Aquatic Invasive Species and protect the central portion of the Columbia River from non-native, fast-spreading species like zebra and quagga mussels.

“Eastbound I-90 is one of the most heavily traveled routes for out-of-state watercraft entering into the Basin,” said WDFW Police Sgt. Pam Taylor. ”The location was strategically selected for the ability to intercept watercraft bound for the basin that utilize I-5 entering Washington from Oregon and heading northbound, and those entering Washington from Canada heading southbound.”

More than 200 invasive species are known to be present in Washington. The state’s economy, recreation, values, culture, and native species are threatened by these damaging plants and animals. For example, hydroelectric dams and irrigation infrastructure would be at great risk should invasive quagga or zebra mussels become established in Washington’s waters. The Northwest is the last region in the United States that remains mussel-free. The projected cost of controlling a Zebra/Quagga mussel infestation in the Pacific Northwest if they were to become established here is $500 million annually

All watercraft (from powerboats to paddleboards) are required by law to stop for a quick check at watercraft inspection stations when initially passing into Washington from another state or country.

“With the volume of watercraft crossing through the state in the Cle Elum area, this new check station is a big victory in the fight against aquatic invasive species,” said Capt. Eric Anderson, with WDFW Police. “We are extremely grateful to the Bureau of Reclamation for seeing the importance of this station and providing funding for it. We wouldn’t have been able to do it without their partnership.”

WDFW is the state agency tasked with preserving, protecting and perpetuating fish, wildlife and ecosystems, while providing sustainable fishing, hunting and other outdoor recreation opportunities.