You can help get the word out about preventing the spread of invasive species through our 2022 Invasive Species Art Contest for high school students!

An invasive species is a plant, animal, or other organism introduced to an area outside of its native range, usually by humans, which negatively impacts the economy, environment, and health. Invasive species affect all of us, whether we realize it or not. By learning more about invasive species in Washington, you can help prevent the next invasion! 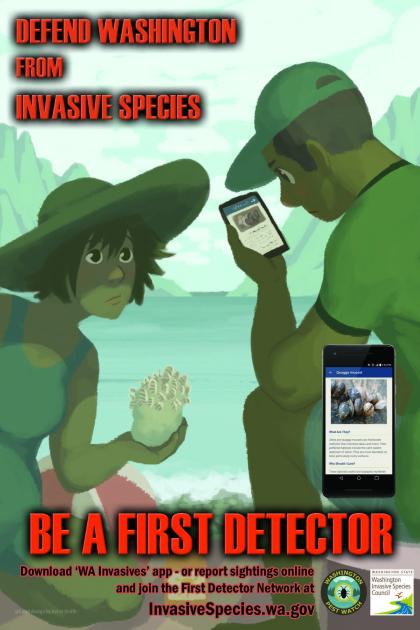 Invasive species are a problem because they:

See it? Say something!

There are several different ways to report a sighting of an invasive species. Please save this information so you have it handy this summer when you are enjoying the outdoors.

We often think of weeds as pesky plants like dandelions that ruin our lawns and gardens. While common weeds can be unsightly, noxious weeds like Scotch broom cause harm to native fish and wildlife. Noxious weeds can be poisonous to wildlife and humans and often out-compete native plant species that provide food and habitat for wildlife. They can also impact agricultural crops.

To preserve and protect wildlife habitat, the Washington Department of Fish and Wildlife uses a variety of methods to manage noxious weeds on department-managed land. We use lawn mowers and tractors to get rid of large noxious weeds, and use a tool called a weed wrench (a long lever with a set of jaws that grabs the base of the plant) for smaller noxious weeds. Our staff has to be very careful when eliminating these plants to minimize soil disturbance which creates conditions for noxious weed seeds to germinate.

Scotch broom has a subterranean (underground) secret. On its roots live bacteria that convert nitrogen from the air into a solid form the plant can use. The relationship between the plant and bacteria is called symbiosis. In this case, there is a trade between the plant that gets a hard-to-find nutrient from the bacteria and the bacteria that receives sugars from the plant produced by photosynthesis. Scotch broom’s final trick is that it is allelopathic, which means it releases chemicals around itself to create a toxic zone that makes it difficult for other plants to grow, eliminating competition.

Watch this 2-minute video from the Montana Department of Agriculture to learn more about Scotch broom and its effects to native habitat.

Get outside and find noxious weeds lurking near you! Use the Invasive Plant Scavenger Hunt to help you identify common invasive plants in your backyard, neighborhood, and local parks. You can also use the Washington State Noxious Weed Control Board’s weed search to help identify plants.

If you find noxious weeds in your backyard, don’t despair! The Washington State Noxious Weed Control Board offers many resources to help you manage these plants.

Invasive quagga and zebra mussels are non-native, freshwater mollusks that have caused significant environmental and economic harm in the United States. These mussels first arrived in the Great Lakes in the 1980s by way of ships' ballast water from the Caspian and Black seas. Now, recreational boats are considered the primary cause of mussel spread in the United States.

The fingernail-size mussels have since spread to more than 20 states and two Canadian provinces where they threaten native fish and wildlife by consuming available food and smothering native species. They also clog water intakes at power plants and other facilities, costing taxpayers millions of dollars a year.

Watch this 6-minute video to learn more about how these silent invaders can wreak havoc on our environment and economy. 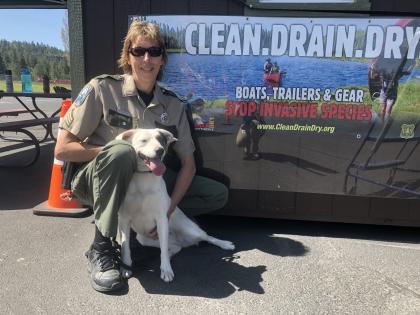 The Washington Department of Fish and Wildlife Police has a special member of their Aquatic Invasive Species Unit. Meet Puddles, a rescue dog who joined the team last year after getting trained by Mussel Dogs to sniff out invasive species.

Puddles can smell about 40 times better than humans and can sniff out zebra and quagga mussels before they've grown large enough for human inspectors to see with the naked eye. She's a fast worker, too -- taking just seconds to inspect boats with her nose!

Learn more about Puddles and how she helps prevent the spread of aquatic invasive species in this activity book.

The bullfrog is the largest frog species in North America and eats practically anything it can catch. Measuring up to 8 inches in length, bullfrogs can leap up to 3 feet and live nearly 10 years. The original native range of bullfrogs was the eastern United States, but they have been introduced to most of western North America. Bullfrogs were first introduced into Washington during the Great Depression in the early 1930s to provide a food source of frog legs for interested hunters.

Adult bullfrogs usually are "sit and wait" predators that readily attack almost any live animal smaller than themselves, including insects, frogs, tadpoles, fish, small snakes, turtle hatchlings, newts, salamanders, bats, hummingbirds, and ducklings. Bullfrogs use their sticky tongues to subdue prey, but that's not their only method of securing food. Large frogs are more likely to lunge at their targets. Once they get a grip with their wide, sturdy jaws, they use their front feet to shove the items down their gullets.

Watch this 2-minute video to see these predators in action.

This bingo-style game is a fun, quick review of invasive species and their impacts. 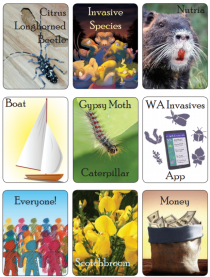 1. Give a Loteria game board and space markers to each player. The goal of the game is to cover three invasive species in a row to win.
2. Have someone read a clue card aloud. Players try to match the answers with the spaces on their game board.
3. If time allows, keep playing until you have gone through the entire deck of clues!

The European green crab is a small shore crab native to the northeast Atlantic Ocean and Baltic Sea. The crab is an effective predator, adept at opening clam and mussel shells, and has been blamed for damaging the soft-shell clam industry on the U.S. East Coast. It also preys on numerous other organisms, making these crabs potential competitors for food sources of native fish and bird species.

Watch this 3-minute video to learn how scientists and volunteers are working together to protect the Salish Sea from European green crabs.

Take a deeper dive and explore this Interactive Story Map from our partners at Washington Sea Grant. The story map shows where European green crabs have invaded, their impacts to native species, a timeline of their spread, and an overview of monitoring efforts.

Learn how you can help report European green crab sightings or volunteer to help monitor for these invasive crabs on the Washington Sea Grant Crab Team's website.