PSNERP technical reports are all peer reviewed publications for use by others to support restoration in Puget Sound and beyond.

Strategies for Nearshore Protection and Restoration in Puget Sound (2012-01) 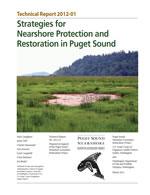 The strategy report integrates change analysis and estimated process degradation, under a simple restoration and protection planning model.  This model offers a simple framework for the management of Puget Sound nearshore ecosystems. We identify a set of delta, beach, barrier embayment and coastal inlet sites. Sites differ in their historical potential to provide ecosystem services. Restoration and protection planning should consider the operation of critical ecosystem processes at the site scale.  The intensity and character of site degradation both indicates the potential for restoration, but creates risk in that restoration efforts may be undermined by degradation of critical ecosystem processes. The development of landscape strategies and conservation actions can be informed by these large scale assessments. We provide suggestions for incorporating PSNERP data into restoration planning. Our framework and assessments point to groups of large complex sites, where there may be exceptional opportunities for large scale ecosystem restoration or protection. 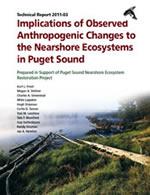 This report by the PSNERP Nearshore Science Team presents a synthesis of the most significant physical changes to the nearshore ecosystems of Puget Sound and implications of these changes to ecosystem functions, goods, and services. Documented historical changes to the shoreline environment of Puget Sound have caused widespread losses in connectivity, increased fragmentation of the landscape and simplification of nearshore landscapes. These impacts have disrupted many nearshore ecosystem processes that support important species and have impaired the system’s capacity to support biological diversity and production. 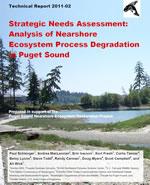 This report characterizes the impacts of shoreline and watershed alterations on nearshore ecosystem processes, identifies the potential causes of observed ecosystem degradation, and assesses which of the identified problems most need to be addressed through restoration and protection actions.  To support this strategic needs assessment, a spatially explicit evaluation framework was created and applied to characterize the extent to which the observed distribution of stressors has degraded each of the 11 nearshore ecosystem processes evaluated. 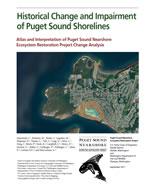 This report describe a comprehensive, spatially-explicit analysis (Change Analysis) of changes to nearshore ecosystems of Puget Sound—its beaches, estuaries, and deltas—over the past 150+ yr. The earliest land surveys of the General Land Office and U.S. Coast and Geodetic Survey (1850s–1890s) were compared to present conditions (2000–2006). These quantitative changes in the structure of Puget Sound’s shorelines were used with other sources of information to interpret the levels and types of impairment of nearshore ecosystem processes. 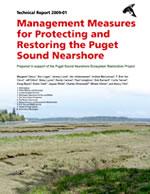 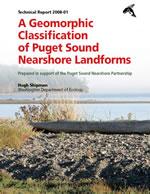 This report proposes a conceptual classification of nearshore landforms that is hierarchical, reflects the primary role of geomorphic processes in shaping the landscape and is relevant to the unique setting of Puget Sound. This framework is based on the concept that ecosystems are shaped by physical processes and are uniquely associated with particular coastal landforms. The report identifies the factors that influence the primary shoreline types observed on Puget Sound and discusses the close relationship between geomorphic processes and landforms.

Valued ecosystem components (VECs) are key elements of the Puget Sound Nearshore Ecosystem Restoration Project (PSNERP) conceptual framework for nearshore restoration. A series of “white papers” was developed that describes each of the VECs. The list of VECs is meant to represent a cross-section of organisms and physical structures that occupy and interact with the physical processes found in the nearshore. 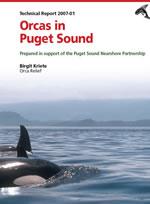 Ecologically, economically and recreationally, southern resident and transient orcas (killer whales) have become greatly important to the nearshore environment of Puget Sound. Economically, whale watching in the San Juan Islands alone has become a $10 million industry in the last few years. The stock of southern resident killer whales (SRKW) in the eastern North Pacific declined by almost 20% in a five-year period to fewer than 80 individuals in 2001. These top predators use nearshore locations for foraging and travel and are very susceptible to human disturbances and ecosystem decline. Their long life expectancy and position at the top of the food web contribute to the whales’ accumulation of toxins. Decreased reproductive success has also been linked with reduced prey availability. 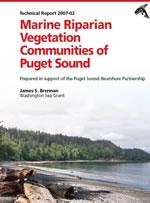 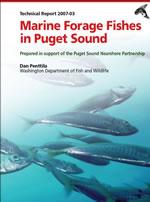 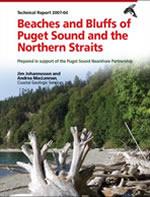 Beaches and bluffs of the Puget Sound region provide critical nearshore habitat functions and values for the region’s fish and wildlife. Coastal bluffs are the primary source of beach sediment along the Puget Sound shore, and their natural erosion is essential for maintaining beaches and associated nearshore habitats. Critical habitats dependent on functioning coastal systems include coastal forests, spawning beaches for forage fish (such as surf smelt), eelgrass beds, and salt marshes, all of which shape the health of salmon populations. 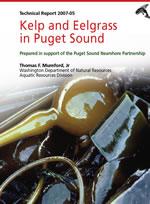 Kelp, which is a large brown seaweed, attaches itself to bedrock or cobbles in shallow waters, especially in areas with moderate to high waves or currents. Eelgrass, which is a flowering plant adapted to the marine environment, roots in sand or mud in shallow waters where waves and currents are not too severe. Both kelp and eelgrass need fairly high light levels to grow and reproduce, so they are found only in shallow waters of nearshore ecosystems. They provide variety of ecological functions, and are highly productive, annually producing large amounts of carbon that fuel nearshore food webs. Shellfish, such as crabs and bivalves, use eelgrass beds for habitat and nursery areas. Fish such as juvenile salmonids, use eelgrass beds as migratory corridors as they pass through Puget Sound; the beds provide both protection from predators and abundant food. 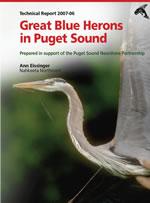 The Great Blue Heron (Ardea herodias) is an iconic species representing the natural heritage, interconnectedness and ecological richness of Puget Sound and the greater Salish Sea (Puget Sound, Strait of Georgia and Strait of Juan de Fuca). This area constitutes the greatest concentration of Great Blue Herons on the West Coast and harbors some of the largest heronries in North America. As a predator and nearshore-associated species, heron populations are indicative of levels of environmental toxins, availability and connectivity of shoreline-upland habitat, and conditions of eelgrass and intertidal habitats. 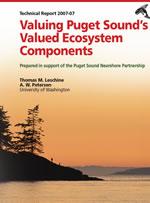 “Valued ecosystem components,” or VECs, are key elements of the Puget Sound Nearshore Ecosystem Restoration Project (PSNERP) conceptual framework for nearshore restoration. This paper discusses the underlying human values that motivate the choice of VECs and their use in environmental management, with a focus on the PSNERP nearshore restoration program. The PSNERP VECs were selected primarily to communicate the value of Puget Sound nearshore restoration to managers and the public, and are intended to speak to ecological and societal values. They embody both economic value and a mix of cultural, spiritual and aesthetic values. 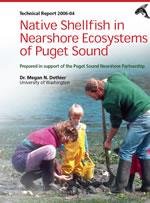 Native shellfish in Washington State are of high ecological, economic, cultural, and recreational value. Ecologically, many of them filter nearshore waters, contributing to water quality. They also serve as predictable sources of food for carnivores in nearshore habitats. Others are predators that are part of the ecological balance of nearshore ecosystems. Culturally, they have been a critical part of the subsistence and culture of native peoples for centuries. This white paper provides a summary of literature describing the relationship between native shellfish and nearshore ecosystems. 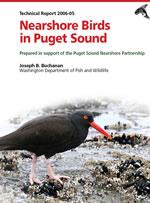 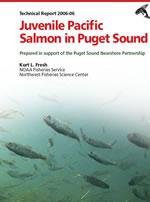 Puget Sound salmon (genus Oncorhynchus) spawn in freshwater and feed, grow and mature in marine waters. During their transition from freshwater to saltwater, juvenile salmon occupy nearshore ecosystems in Puget Sound. This period of nearshore residence is critical to the viability, persistence, and abundance of Puget Sound salmon. This white paper summarizes what we know about salmon use of nearshore habitats to aid efforts protecting and restoring nearshore habitats.