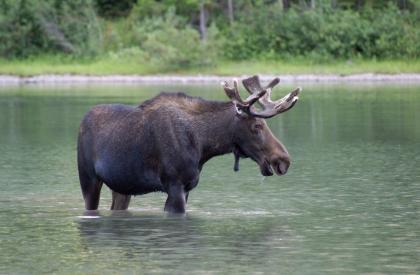 A bull moose stands in a shallow lake.
Category: Mammals

As the largest member of North America's deer family, the moose is unforgettable, whether viewed from a distance or especially when encountered up close. Its sheer size commands respect. Its uniqueness makes it a curiosity.

Moose are dark brown and long-legged with massive shoulders. They have prominent muzzles with an overhanging upper lip, and a large flap of hair-covered skin that hangs beneath the throat called a "bell" or a dewlap. Adult males, or bulls; have broad, flat, palmated antlers tipped with a number of points, depending on age and health. Yearling males have forked antlers and by about five years of age the familiar palmated rack has developed. Antlers are shed during the winter and regrown each spring.

Washington's moose belong to a subspecies called "Shiras" moose, which is physically smaller than more northern-dwelling moose. Adults measure nearly six feet at the shoulder. Bulls weigh between 850 and 1,100 pounds and adult females or cows weigh between 600 and 800 pounds. Adult bull's antler spread range from 35–45 inches and rarely exceeds 55 inches across.

As of 2015, there were approximately 5,000 moose estimated to live in Washington State. The majority of these are in the Selkirk Mountains (Pend Oreille, Stevens, Ferry, and Spokane counties) with smaller populations in the north Cascades, Okanogan, and Blue Mountains.

Moose have been documented to wander into many other places throughout the state including the high desert country of the Columbia Basin. Generally moose prefer forested habitat where there are lakes, marshes, and other wetlands. They have a circumpolar distribution around the world. Moose have expanded their geographic range in some states, but most locations include cold winters with seasonal snow cover. This is due in part to their large bodies; moose prefer temperatures below 60ºF in summer and below 32ºF in winter.

With its great size and forage demands, the home range of the average moose in any given season is approximately three to six square miles, although they habitually wander much further.

The name for moose came from a Native American tribe, the Algonquin, and translates to "twig eater." This is an appropriate name as these animals predominately consume twigs, bark, and leaves of trees. In areas with abundant wetlands, moose will eat aquatic vegetation and willows. But in less wet areas, like northeast Washington, they also eat the woody browse in early stages of regrowth following disturbances like fires, logging, and clearing. Moose are considered a pioneering type animal and adapt to a variety of available forage that change seasonally.

Generally moose prefer forested habitat where there are lakes, marshes, and other wetlands. They have a circumpolar distribution around the world. Moose have expanded their geographic range in some states, but most locations include cold winters with seasonal snow cover. This is due in part to their large bodies; moose prefer temperatures below 60ºF in summer and below 32ºF in winter. With its great size and forage demands, the home range of the average moose in any given season is approximately three to six square miles, although they habitually wander much further.

Moose tend to be loners, except for cows when they have calves. Adult bulls occasionally form temporary aggregations following the rut in autumn. Calves often live with their mother until the cow drives them off to give birth to a new calf. Once in a while, a yearling will re-group with the family several weeks after birth of the new calf and remain with the cow for up to two years of age. Breeding occurs in the fall, with the rut typically beginning around mid-September to early October. Calves are born as single or twins in May – June.

Black bears and cougars are the most common predators of moose calves in Washington. In areas where wolves and grizzly bears are more abundant, they are the dominant moose predators. Hunting, vehicles, male to male competition, parasites, and disease are also responsible for moose mortalities. Few moose live past 15 years of age in the wild. The lifespan of a moose differs between the sexes, with the average being around 8 years old.

The Washington Department of Fish and Wildlife (WDFW) classify moose as a game animal. A limited number of special, once-in-a-lifetime "any moose" (antlered bull or antlerless cow) hunting permits are issued each year on a drawing basis to hunters with valid licenses and tags. The season is open during October and November in several Game Management Units (GMUs) in northeast Washington. Special hunting permits for antlerless-only moose are also issued on a drawing basis, including some just for youth hunters (under 16 accompanied by adult), senior hunters (65 and older), disabled hunters, and Master Hunters (used for moose damage control).Washington's moose population has been slowly growing since the first confirmed moose sighting was made in Pend Oreille County in the 1950s. A study conducted in the 1970s indicated a population of approximately 60 moose. The first moose hunting season in Washington was in 1977 with three permits in the Selkirk Unit of Pend Oreille County. Increased moose sightings throughout the area and beyond suggested a growing population, and in 1987 the first moose hunting permit was allowed in the Mt. Spokane Unit. By 1998 there were a total of 43 permits among five GMUs. By 2015 there were 107 any moose permits and 71 antlerless permits across 12 GMUs.

An even greater testimony to the parallel growth of both human and moose populations in Washington is the increased incidence of moose wandering into the suburban and urban areas of Spokane. Moose sometimes take up residency where water and succulent vegetation is more readily available. By 2015, almost daily reports of problem or "nuisance" moose were received by WDFW's Eastern Region office in Spokane Valley or WDFW Enforcement officers who respond to potentially dangerous wildlife situations.

When creating a new landscape or planning for the one you already have, there are several features that could increase unwanted moose residency at your property. Ponds, pools, and other large water features. Landscaping with these features can attract moose during all times of year, but more specifically during hot summer months. It is very difficult to encourage moose to move away from these types of landscapes. Landscaping plants. Species of plants that are of specific interest to moose include fruit tree branches, dogwood, willow, aspen, birch, fir, and pine species. Eliminating or reducing access to these species of plants can discourage moose from spending significant time at your property

During the days when temperatures are hot, moose are likely to look for cool and wet locations during the daytime hours. During these months, try to water lawns at night. This will decrease moose usage of your property.

Moose that are fed by people often become aggressive when they are not fed as expected. They may attack another person who has no food to offer. A moose with a history of unprovoked attacks on people may have to be killed to protect public safety.

Do not approach any moose

Even if moose seem quiet and gentle, they can change their disposition rather quickly. Moose often lay down in the shade of buildings and trees to rest and cool down. If approached repeatedly, even by the best-intentioned onlookers, it may become stressed and aggressive. Enjoy the visitor from a respectable distance. Use binoculars and telephoto camera lenses. Be patient and wait for the moose to move along.

Keep all dogs under control and away from moose

Moose consider dogs, which are close relatives of wolves, to be a direct threat. Moose have been known to go out of their way to kick at a dog, even one on a leash or in a fenced yard. If you see a moose where you live, bring dogs inside. If you're walking with your dog and see a moose, keep your dog quiet and take an alternate route out of the area.

If a moose spends any considerable amount of unwanted time on your property, the careful use of loud noises (banging pots and car horns) or scare devices (bird scare pyrotechnics and air horns) may be used to encourage the animal to move along. It is important to note that the best time to use this type of deterrent is from a safe location, a safe distance, within a short period of time of the moose's arrival at your property, and earlier in the morning (if on a hot day).

How does WDFW address moose reports?

Reported moose problems are addressed in many ways and our actions are dependent on each situation.

Advice. Most often property owners are advised on simple ways to discourage moose and avoid property damage or safety threats.

WDFW hazing. Sometimes WDFW personnel attempt to "escort" or haze moose away from the potential hazards of civilization and back to the woods, using non-lethal projectiles like paintball guns.

Immobilization and relocation. Very rarely, moose in areas not conducive to hazing are immobilized via darting, and subsequently relocated. This method is not used often due to the danger to WDFW personnel, the public, and the moose.  For example, occasionally moose do not metabolize the immobilization drugs or they can regurgitate food into their lungs and may die.. Relocated moose are marked, either with colored ear tags or radio telemetry equipment to learn more about where they go and whether they are repeat visitors to heavily populated areas.

Lethal removal. Occasionally, moose have to be lethally removed by WDFW or by Master Hunters. This is typically in cases where moose have made contact with people or domestic animals (like dogs) and are euthanized due to human safety concerns (See Safety in Moose Country).

Most people seem to like moose because they're so different. They don't seem to spook or shy away from us as readily as deer, and may appear docile or even curious while around people. It is important to remember that anything as large as a moose can be dangerous; this is why these animals are classified as Dangerous Wildlife. Although moose have long legs, they are not built for speed like deer. Moose will often choose "fight" over "flight" to escape a situation or when they feel threatened.

What does an aggressive or agitated moose look like?

Moose can be aggressive any time, but at these times in particular:

Because moose can be aggressive any time of the year, what do you do when you see a moose? When recreating in the outdoors:

In case of attack…

Moose attacks on humans are considered very rare, but it is important to be prepared. Many moose charges are bluffs or warnings, but you need to take them all seriously. Even a calf, which weighs 300 to 400 pounds by its first winter, can injure you. A moose that sees you and walks slowly toward you is not trying to be your friend. It is probably warning you to keep away (or looking for a handout if it's been fed).

How to respond to an aggressive or agitated moose:

If we take the time to think about moose behavior and our own in response to them, and we teach our children to do the same, we can enjoy sharing space with this spectacular animal.