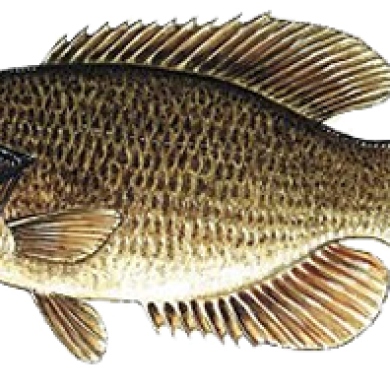 Rock bass, warmouth and green sunfish are similar in appearance. None of the three is common in the state. They are stockily built, and from a side view have a body shape somewhat like the bluegill. Their mouths are quite large and strong in comparison to the bluegill and pumpkinseed, though. Both rock bass and warmouth have reddish eyes, especially noticeable in freshly caught rock bass. To tell them apart, remember that the rock bass has five (or more) spines in its anal fin, while the warmouth and green sunfish have only three. The warmouth has a small band of teeth near the tip of its tongue, and fewer than 45 scales in the lateral line. The green sunfish has no teeth near the tip of the tongue, has more than 45 scales in the lateral line, and has a dark spot at the base of the last three soft dorsal rays. The average rock bass is between 6-10 inches, and they are rarely over a pound.