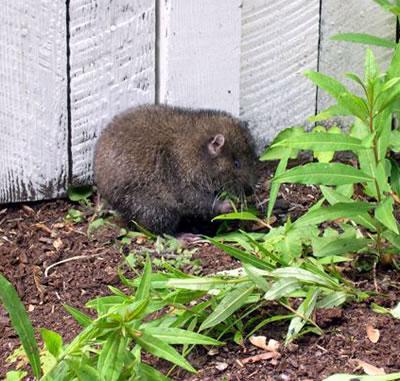 Mountain beavers are considered by many taxonomists to be the world's most primitive living rodent species. They are not really beavers, but were so named because they gnaw bark and cut off limbs in a manner similar to true beavers.

Mountain beavers, also called boomers, are 12 to 14 inches long and resemble large, overgrown hamsters or tailless muskrats. They have small ears and eyes, short, rudimentary tails, and large curved front claws that are used for digging, grasping, and climbing

Mountain beavers live in moist forests, on ferny slopes, and are occasionally found in damp ravines in urban areas. Their worldwide range is the coastal lowlands and coastal mountains of southern British Columbia (from the Fraser Valley to the Cascade mountains), western Washington, western Oregon, and south into California.

Mountain beavers are herbivores and eat a wide variety of plants. Food items include all above and below-ground parts of ferns, salal, nettles, fireweed, bleeding heart, salmonberry, brambles, dogwoods,
vine maples, willows, alders, and conifers. Look for signs of clipped twigs and branches and stripped bark on shrubs and trees. Seedlings less than 1½ inch in diameter are most often eaten. These are usually clipped off at or close to ground level, making signs of activity difficult to locate and invisible when covered by soil, vegetation, or debris. Multiple bites on the clipped plant can create a serrated edge, but more often a clean, slanted cut similar to those made by rabbits, hares, voles, and other rodents is evident. On small trees and large seedlings, the side branches are frequently clipped off high in the tree, leaving 1- to 3-inch stubs. (To distinguish mountain beaver activity from that of porcupines, note that mountain beavers eat from the bottom up and porcupines eat from the top down.) Mountain beavers also eat rhododendrons and other ornamental perennials, shrubs, and trees. Food items are eaten on site, temporarily stored outside burrow entrances, or placed in caches inside burrow systems. Mountain beavers will climb into trees to lop off living branches that are up to 1 inch in diameter. Mountain beavers have primitive, inefficient kidneys and must drink 1/3 of their body weight in water every day.

Mountain beavers dig tunnels 6 to 8 inches in diameter throughout their territories, which may be 2 acres or more, depending on food and cover availability, and population density. Tunnel systems, or burrow systems, are located in or near thick vegetation, and tend to radiate out from a nest site. Mountain beavers have been found using tunnels that are 10 feet underground. Burrow systems may contain ten or more exits and special chambers for nesting, feeding, storing food, and storing droppings. Unoccupied mountain-beaver tunnels and chambers are used by mice, moles, voles, rats, cottontail rabbits, weasels, mink, spotted skunks, and salamanders.

Mountain beavers are generally slow-moving animals so they leave a trail of closely spaced tracks (Fig. 6). Look for tracks near active burrows. The imprints, in mud, show distinctively long and slender toes that are not apt to be confused with those of any other animals.

Mountain beaver droppings are seldom seen because they are normally deposited inside the burrow system. If you find droppings, they are probably from another animal using the burrow.

Mountain beavers are solitary except during the breeding season. Breeding takes place from February to April. Two to four young are born after a 28- to 30-day gestation period.

Most people would not tolerate problematic mountain beavers on their commercial property because of the logical concern that leaving them alone would lead to more damage. When they are feeding in Christmas tree farms, commercial timber farms, and other commercial operations, this may be true. For the homeowner, however, mountain beavers are more of an occasional nuisance in the landscape or garden, not a long-term problem or threat. There are of course, exceptions.

If the burrowing activity of mountain beavers is causing problems for livestock in pastures or undermining roadbeds, irrigation ditches, and earthen dams, see Muscrats for prevention strategies. Mountain beavers occasionally will get caught in window wells. See Skunks for information.

While you may be able to remove an existing mountain beaver population or force them elsewhere, if suitable conditions exist and mountain beavers occur nearby, others will eventually move into vacated areas. In addition, it is important to understand that mountain beaver problems rarely can be resolved by a quick fix method, but that a continuing commitment to whatever solutions are adopted is required.

Mountain beavers are not considered a significant source of any infectious disease that can be transmitted to humans or domestic animals. Anyone handling a living or dead mountain beaver should wear rubber gloves, and wash his or her hands well when finished. Although the largest flea (Hystrichopsylla schefferi) in the world—it is up to ¼ inch long—is found on mountain beavers and in their burrows, it does not bother humans.

Because mountain beavers are territorial, removing them from an area may appear to solve the problem. However, other mountain beavers will eventually enter the area if attractive habitat is available.

Long-term control is possible by first reducing or eliminating the mountain beaver population by trapping, and then continuing with a maintenance-trapping program to remove invading animals as they become evident. Mountain beavers can be trapped anytime, but for best results and for humane reasons it is best to concentrate the effort in late winter, before they give birth (see "Legal Status"). A wildlife damage control company can be hired to do the trapping, or you can do it yourself (see Hiring a Wildlife Damage Control Company). Never attempt to handle trapped or wild mountain beavers. They are capable of producing a very bad bite and have very sharp claws.

It is unlawful to release a mountain beaver anywhere within the state, other than on the property where it was legally trapped, without a permit to do so (RCW 77.15.250; WAC 220-450-010). Because legal status, trapping restrictions, and other information about mountain beavers change, contact your local Fish and Wildlife office for updates.