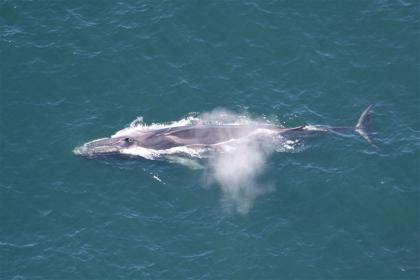 The stock of fin whale that occurs along the U.S. west coast (Washington, Oregon, and California) is estimated at about 9000 whales and is experiencing strong growth. Ship strikes, fisheries entanglements, marine debris, human-generated marine sound, and climate change may hinder recovery.

Fin whales are large baleen whales and are the second-largest whale species. Their length ranges from 75 to 85 feet and weight ranges from 40 to 80 tons. This species is named after the dorsal fin located near the whale’s tail. It has asymmetrical head coloration--dark on its left lower jaw and white on its right; its tongue coloration is the opposite.

Fin whales usually inhabit deep offshore waters and the outer slopes of continental shelves, where they feed. They prefer temperate and subpolar regions.

Fin whales feed by lunging and skimming in the water. Feeding occurs only in summer when large amounts of krill are consumed. Small schooling forage fish and squid are also eaten. A fin whale eats as much as two tons of food each day.

Mating and the birth of calves occur in the winter at unknown locations. Gestation lasts 11 to 12 months, and adult females bear one young every 2 to 3 years. Sexual maturity is achieved at 6 to 12 years of age. Life span is 80 to 90 years. Breeding between fin whales and blue whales has produced hybrids.

This species usually occurs alone or in groups of two to seven individuals. They regularly associate with other species of large whales and dolphins.

Fin whale distribution encompasses the world's oceans from the tropics to higher latitudes. Populations in the North Pacific are estimated to have once numbered 42,000 to 45,000 whales, but they were reduced to an estimated 13,000 to 18,700 animals during the whaling era. This species commonly migrates between higher latitude waters during summer and lower latitude waters during winter, but animals in some areas may be present year-round.

Fin whales in Washington are part of the California/Oregon/Washington stock, which is partially migratory. Historical stock size is unknown. In 2008, the stock was estimated to contain 3,044 whales. Abundance off Washington and Oregon combined was estimated at 280 to 380 individuals from 1996 to 2001.

As of 2017, the stock held about 9,000 animals and was experiencing strong growth. Sightings and acoustic detections indicate this species is present off Oregon and Washington for most of the year. They are regularly off the outer coast of Washington, and rare sightings in the Salish Sea in 2015 and 2016 are the first in recent decades.

Fin whales likely have low physiological sensitivity to changes in ocean temperature and other changing oceanographic conditions because of their large feeding range and exposure to varying ocean conditions. However, their overall sensitivity is expected to be highest due to potential changes in the availability of their prey, such as euphausiids and copepods, which may experience population declines as a result of increases in ocean temperature, increases in ocean acidity, and changes in other oceanographic processes. Limited prey availability could lead to decreased fin whale fecundity, survival, and population sizes, though they may be able to adapt by switching target prey species (e.g., feeding more on small schooling fish rather than krill) or altering its current feeding range.