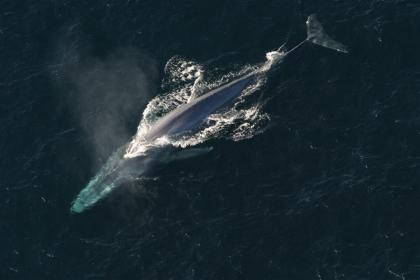 The blue whale is the largest of the baleen whales, reaching up to 110 feet long and weighing up to 165 tons. Its gray-blue body is long and slender with a relatively small dorsal fin.

Blue whales are more pelagic than most other whales, but also visit coastal waters. Most blue whales migrate between summer and winter ranges, but some individuals appear to remain in certain areas year-round. Occurrence is linked to areas of high zooplankton abundance.

This large baleen whale forages primarily on krill along continental shelf slopes and deeper oceanic waters. Krill, a type of euphausiid, are small, shrimplike animals. Poleward movements in spring allow the whales to travel to areas with high summer and fall production of krill.

A blue whale consumes up to 8,000 pounds of krill in a day, and it can filter up to 70 percent of its body weight in water during each feeding lunge.

The whales return to lower latitudes in winter, where most reproductive activity takes place, including births and mating. The average calving interval is probably two to three years, and the age of sexual maturity is thought to be 5 to 15 years. It is suspected that calves, at approximately six months of age, may stop feeding on their mother’s milk and start feeding independently. Breeding between blue whales and fin whales has produced hybrids.

Blue whales do not form close social groups, but typically occur alone or in pairs.

Life span of this species is estimated to be 80 to 90 years. Healthy adults are not particularly vulnerable to predators, but calves are likely vulnerable to shark and killer whale attacks.

Blue whales produce sounds that travel long distances through the water. Singing is performed only by males and occurs year-round.

Blue whale distribution covers the world's oceans from the tropics to higher latitudes. The total global population is estimated at 10,000 to 24,000 whales.

Individuals occurring off the Washington coast belong to the Eastern North Pacific stock; the whales do not enter the state's inner waters. The stock mostly migrates between northern summer feeding locations and wintering areas off western Mexico and Central America. Feeding occurs during summer and fall off the United States west coast (especially California) and, to a lesser extent, off British Columbia, in the Gulf of Alaska, and in the central North Pacific.

Blue whales regularly occurred off the Washington coast prior to and during the whaling era. Sightings became rare, however, with just three recorded in the 50-year period prior to 2015, including six animals seen in December 2011. Blue whales are now regularly present off the outer Washington coast. Current stock size is about 1,900 whales and remains below the estimated historical stock size of 2,200 individuals. Since the 1990s, the stock appears to have maintained a stable population trend.

Due to their migratory patterns and the wide range of ocean conditions that they experience, blue whales are unlikely to experience significant physiological sensitivity to climate-induced ocean changes. Their overall sensitivity is expected to be highest due to potential changes in their primary prey, euphausiids, or krill. Blue whales require large aggregations of euphausiids for optimal foraging, and euphausiid conditions are strongly linked with oceanographic variability. Cooler, upwelling waters support high primary production and euphausiid biomass, while warmer waters like those found during positive Pacific Decadal Oscillations cycles and strong El Niño events lead to lower primary productivity and decreased euphausiid abundance. Therefore, increases in ocean temperature or changes in ocean circulation, as well as increases in ocean acidity, could lead to declines in euphausiid abundance and limited prey availability for blue whales. Additionally, changes in peak primary productivity and euphausiid abundance could lead to alterations in blue whale migration timing.

WDFW partners with Cascadia Research Collective to obtain funding for large whale surveys in Washington waters, resulting in much of the recent knowledge of blue whales for the state. WDFW also participates in NOAA’s West Coast Marine Mammal Stranding Network.

Calambokidis, J. 2013. Updated abundance estimates of blue and humpback whales off the US west coast incorporating photo-identifications from 2010 and 2011. Document PSRG-2013-13 presented to the Pacific Scientific Review Group, April 2013.