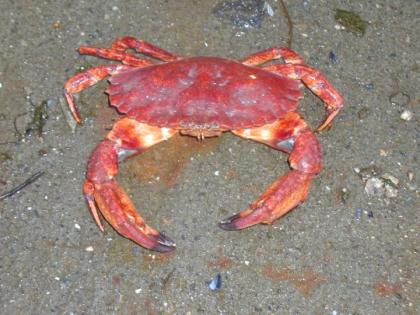 Red rock crab, as their name implies, prefer rocky substrates but can also be found in eelgrass, soft-bottom habitat, and shellfish beds from the mid intertidal to depths of about 260 feet. The species is native to North American west coast estuaries from Alaska to Northern Baja California and is common throughout Puget Sound.

Marine Area 4 east of the Bonilla-Tatoosh line and marine areas 5-13:

Crabbing along the coast

Marine areas 1-3 and Marine Area 4 west of the Bonilla-Tatoosh line:

For up-to-date information on crab areas in Washington, visit our crab seasons and areas page.

Recreational crabbing is allowed off the coast of Washington – often year-round – and in Puget Sound, where the fishery is open during specific summer and winter months. For a full breakdown, visit the crab seasons and areas page.