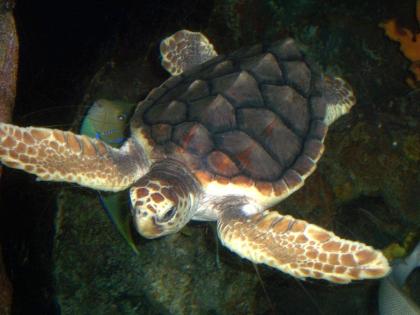 These rare visitors off Washington outer coast are declining, threatened by factors occurring primarily outside of the state.

Issues related to climate change and plastic pollution, however, could be addressed in Washington and benefit multiple marine species.

The loggerhead sea turtle weighs up to 250 pounds and is 3 feet in length. The species is generally reddish-brown on top, pale on bottom, and has a heart-shaped carapace (shell).

Loggerhead sea turtles mostly inhabit continental shelf and nearshore marine waters, but occur in the open sea during migration. These sea turtles are known to make long migrations, and some Pacific loggerheads migrate over 7,460 miles between nesting beaches in Japan and feeding grounds close to Mexico.

Females reach sexual maturity at about 35 years of age. Nesting occurs mainly at night, often at high tide. Females lay eggs in three to five nests per nesting season, with 80 to 120 eggs per clutch. The eggs incubate in the warm sand for about two months.

Hatchlings move to masses of seaweed at sea, where they remain for perhaps three to five years.

Loggerhead sea turtles occur throughout the tropical and temperate regions of the Atlantic, Pacific, and Indian Oceans. Most records along the United States west coast are of juveniles along the coast of California, with very few sightings reported off Washington, Oregon, and northward to Alaska.

The west coast of Mexico, including the Baja Peninsula, provides critically important habitat for juveniles. Loggerheads nest in tropical and subtropical regions. The only known nesting areas in the North Pacific are in southern Japan.

For maps of range-wide distribution and conservation status, check out NatureServe Explorer and the International Union for the Conservation of Nature Red List.

Loggerhead sea turtles will be sensitive to climate change through a number of pathways. Turtles may respond directly to increases in temperature by shifts in sex ratios; warmer temperatures promote higher levels of female young. Increases in sea surface temperature could also lead to changes in migration patterns and alterations in nesting and hatch timing, which could prompt mismatches between turtle abundance and prey availability; loggerheads have been found to have decreased nesting abundance with warmer sea surface temperature. Loggerheads prey on a large number of species, suggesting that they may be able to locally switch their prey base, which would decrease their sensitivity to climate change if climate change-induced changes in their prey base occur. Increases in sand temperature could lead to higher levels of hatchling mortality. Indirectly, increases in sea surface temperature and decreases in pH could affect invertebrates (e.g., crabs, crustaceans, mollusks) that loggerheads prey on and potentially limit prey availability. Turtle nesting habitat may also be impacted by sea level rise, increased storms, and coastal inundation, which could lead to lower reproductive success. The broad migratory range of loggerheads may allow them to search out different suitable nesting habitat (although nesting does not generally occur in Washington State). Loggerhead sea turtles are the globally most widespread sea turtle species of the sea turtles that appear in WA waters, and have the most diverse secondary consumer diet; and hence, would be expected to be the most plasticity in their response to climate change; therefore, I suggest downgrading the sensitivity and overall vulnerability ranking from Moderate-High to Moderate.

See the Climate vulnerability section above for information about the threats posed to this species by climate change.