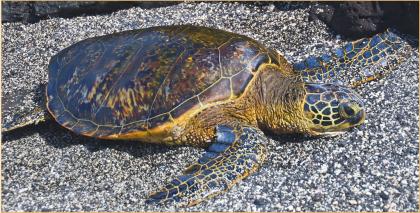 These rare visitors off Washington's coast are declining, threatened by many factors primarily outside the state. Like other sea turtles, they are vulnerable to climate change and consumption of plastic pollution.

An adult green sea turtle weighs 250 to 400 pounds and is 3 to 4 feet in length. They are the largest of all the hard-shelled sea turtles, with a dark shell and lighter underside. Distinguishing characteristics include a serrated lower beak and two large scales between the eyes.

Green sea turtles forage primarily on seagrass and algae, but also consume invertebrates such as jellyfish and sponges. Feeding occurs in shallow, low-energy marine waters with abundant submerged vegetation, as well as in convergence zones in open ocean.

Coral reefs and rocky outcrops near feeding areas are often used for resting. Nesting occurs on sandy beaches, usually on islands but also on the mainland.

Females reach sexual maturity at 25 to 35 years. They migrate hundreds or thousands of miles between foraging areas and nesting beaches, returning every two to five years to lay eggs at the same beaches where they were born. Females lay an average of five clutches of eggs per nesting season.

In Florida, green sea turtle nests contain an average of 135 eggs. The eggs incubate in the warm sand for about two months, after which hatchlings swim to the open ocean to feed on pelagic plants and animals. At 3 to 5 years of age, juveniles travel to nearshore foraging sites.

Green sea turtles are found worldwide, most often in tropical and subtropical waters near islands and along continental coasts between 30 degrees north and 30 degrees south. Along western North America, the species occurs primarily south of California, but occasionally extends as far north as southern Alaska. It is rarely observed in Washington, and those observations are often individuals experiencing cold shock. Nine individuals were found stranded along the Washington coast between 2001 and 2021.

For a map of range-wide distribution and conservation status of the green sea turtle, check out NatureServe Explorer.

Green sea turtles will be sensitive to climate change through a number of pathways. Turtles may respond directly to increases in temperature by shifts in sex ratios; warmer temperatures promote higher levels of female young. Increases in sea surface temperature could also lead to changes in migration patterns, nesting and hatch timing, and prompt mismatches between turtle abundance and prey availability. Increases in sand temperature could lead to higher levels of hatchling mortality. Green sea turtles are fundamentally herbivores that feed on sea grasses and selected other primary producers. Indirectly, increases in sea surface temperature and decreases in pH could lead to alterations of sea grasses and macroalgal species that green turtles prey upon and limit prey availability. Turtle nesting habitat may also be impacted by sea level rise, increased storms, and coastal inundation, which could lead to lower reproductive success. The broad migratory range of green turtles may allow them to search out different suitable nesting habitat (although nesting occurs outside of Washington State).

See the Climate vulnerability section above for information about threats posed to green sea turtles by climate change.