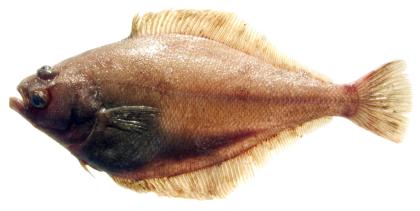 A left-eyed flatfish with an elongate to oval body shape. The eyed side is dull light brown, mottled with brown or black and sometimes yellow or orange, while the blind side is off-white to tan. The caudal fin is truncated or slightly rounded. This species has a lateral line that is nearly straight and lacks an accessory dorsal branch. The mouth is medium-sized with the maxillary extending below the anterior part of the lower eye. Pacific sanddab have large eyes with a pronounced bony ridge that runs between them. This species lacks an anal spine. Positive identification of Pacific sanddab, gulf sanddab, speckled sanddab, and longfin sanddab require gill raker and lateral line scale counts. Pacific sanddab have 12 to 16 gill rakers on the lower limb of the first gill arch and 61 to 70 scales along the lateral line.

Pacific sanddab range from the Sea of Japan, Aleutian Islands, and Bering Sea, south to Cape San Lucas, Baja California. They prefer sand or mud-sand bottoms and can be found as deep as 550 m (1,804 ft), but are most commonly found at depths between 50 to 150 m (164-492 ft). Juveniles are common in shallow water and occasionally move into tide pools.