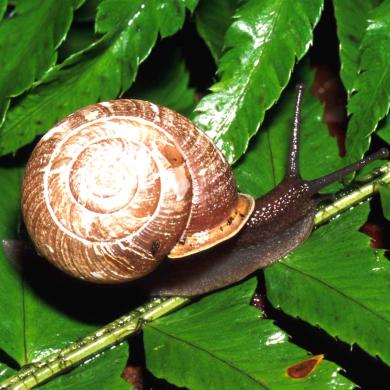 An adult Puget Oregonian terrestrial snail. (Copyright 2000 William Leonard)
Category: Molluscs
Ecosystems: Riparian areas
If you see this species, please share your observation using the WDFW wildlife reporting tool or email us at  wildlife.data@dfw.wa.gov. Be sure to include a photo of the species for verification and location (latitude/longitude coordinates) of your observation.

The Puget Oregonian's population size is low and has a declining trend. These snails are in the Family Polygyridae. Snails in this family are of conservation concern because they have specialized habitat requirements. Snails do not readily disperse and populations are isolated. They are vulnerable to alteration of their habitat.

The Puget Oregonian is a terrestrial gastropod. Life history of the terrestrial Polygyrids may resemble that described for the Oregon forestsnail (Allogona townsendiana). This species is most active during the wet spring months when mating occurs. Adults lay eggs in new or existing flask-shaped nesting holes, or sometimes in pre-existing depressions in soil, moss, and under coarse woody debris, or at the base of vegetation. Juvenile snails hatch approximately eight to nine weeks after oviposition, and disperse from the nest site within hours of hatching.

This snail hatches from eggs and can live for more than one year. However, specific details on life span and reproduction for this species are not found. Like most terrestrial gastropods, Cryptomastix are hermaphroditic, having both male and female organs.

Polygyrids are generally herbivorous and fungivorous snails. It is suggested that Puget Oregonian (C. devia) might aid in the dispersal of fungal spores, including mycorrhizal fungi that form tree-root associations which promote healthy tree growth.

The Puget Oregonian is found in the western Cascade Range and Puget Trough from southern Vancouver Island, B.C. through western Washington to the Oregon side of the Columbia Gorge. Records exist from Clark, Cowlitz, King, Lewis, Pierce, Skamania, and Thurston Counties, Washington. Scientists noted 178 locations, but at most sites only one to three snails were found. Most sites are in Gifford Pinchot National Forest, where it is relatively common only in the Cowlitz and Cispus River drainages; elsewhere it is quite rare and local.

Much of the species' former range is now urban or has been developed for agriculture; 10 of 42 records from prior to 1994 are from the metropolitan Seattle area. There is a single record from the eastern Cascades near Cle Elum. Formerly found in Hood River and Wasco Counties of Oregon, and in British Columbia (primarily Vancouver Island). In Oregon, this species is in severe decline; currently only a few sites in Multnomah County remain.

For a map of worldwide conservation status and distribution, check out NatureServe Explorer.